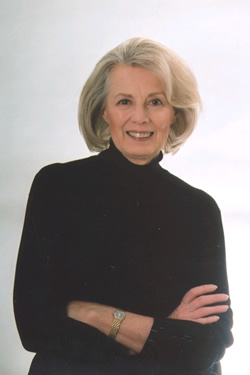 Karna began her career in San Francisco as a TV news reporter and anchor first for KRON-TV and then KGO-TV. She later moved to Washington, DC, to anchor the ten o’clock news on Channel 5 and to host both a nationally syndicated program on business and economic issues and a three-hour news/talk radio show.

When Ronald Reagan was elected President, he stood in front of Blair House and named Jim Brady as his Press Secretary with Karna as Jim’s Deputy. She had almost daily meetings with the President and traveled on Air Force One. She was also sent to South America and the Far East to give speeches to government, business and student groups on the President’s economic priorities.

Next, she was named Senior Director and spokesman for the National Security Council. She attended arms control talks with the Soviets and traveled with the team that briefed the leaders of Great Britain, France and Italy as well as Pope John Paul II. Those were “evil empire” days, so it was a unique experience to chat with the Soviet Union’s General Secretary Gorbachev at that first Summit meeting in Geneva.

When Karna left the White House to become Senior Vice President of a Public Affairs firm, she was the highest ranking woman on The White House staff.

On a personal note, she is married to Dick Bodman — they maintain homes in Naples, Florida, Washington, DC. and Rancho Santa Fe, CA.