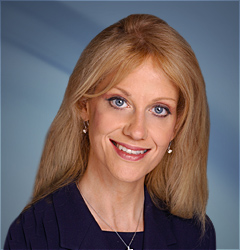 Kellyanne Elizabeth Conway is Founder and President of the polling company, inc./WomanTrend a privately-held, woman-owned corporation founded in 1995.  The firm is headquartered in Washington, DC and maintains an office in New York City.

Kellyanne is one of the most quoted and noted pollsters on the national scene, having provided commentary on over 1,200 television shows on ABC, CBS, NBC, PBS, CNN, CNBC, MSNBC, HBO, Comedy Central, MTV and the Fox News Channel, and numerous radio shows and print stories.

Throughout her two decades in market research, Kellyanne has provided primary research and advice for clients in 48 of the 50 states and has directed hundreds of demographic and attitudinal survey projects for statewide and congressional political races, trade associations, and Fortune 100 companies.  Kellyanne is a professionally trained moderator who has personally directed more than 300 focus groups. Clients have included Lifetime Television, The Heritage Foundation, Major League Baseball, The Federalist Society, Coalition of Community Pharmacists Association, the U.S. Office of Personnel Management, Mass Connections, American Express, ABC News, Ladies Home Journal, and the U.S. Department of Labor.

In what was a poor year for Republican polling, she and her team were among the few on the GOP side to predict the outcomes of major races in 2012.  In 2014, all of their general election candidates won and the RNC tasked Kellyanne with helping to defeat the so-called “War on Women.”  Beginning in 2015, her firm assumed management of the Conservative Political Action Conference (CPAC) straw poll.

Kellyanne has been profiled in over a dozen magazines, newspapers, and television programs.  Her polling data and op-eds have been published by The Wall Street Journal, The Washington Post, The New York Times, The New York Post, The Washington Times, USA Today, National Review, Human Events, Investors Business Daily, and Politico and she is a regular on the speaking circuit. She has received the Washington Posts Crystal Ball award for accurately predicted elections and with Celinda Lake co-authored the critically-acclaimed book, “WHAT WOMEN REALLY WANT”.

She is a Trustee of the Phillips Foundation and is a board member of the Clare Boothe Luce Policy Institute, Independent Women’s Forum, American Conservative Union, the National Journalism Center, and Men Against Breast Cancer.  Mrs. Conway retains memberships in the American Association of Public Opinion Research (AAPOR) and the Qualitative Research Consultants Association (QRCA).  Kellyanne is married to George T. Conway III and they have four young children.