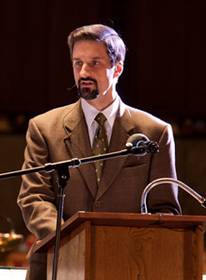 Michael P. Foley holds a doctorate in Catholic systematic theology and is an associate professor of Patristics in the Great Texts Program at Baylor University. Before coming to Baylor, he taught at Boston College and the University of Notre Dame.

Foley has published 150 essays and reviews in places such as First Things,The Latin Mass, and The Wall Street Journal. His interests include theology, political philosophy, film and popular culture, and the quest for happiness.

Foley has edited or authored several books including, St. Augustine’sConfessions, Why Do Catholics Eat Fish on Friday? and Wedding Rites. His forthcoming book from Regnery Press, which is already generating quite a bit of excitement, is Drinking With the Saints: A Sinner’s Guide to a Holy Happy Hour.

Michael Foley lives happily in Waco, Texas, with his wife Alexandra and their six children.