Drinking with the Saints: The Sinner’s Guide to a Holy Happy Hour 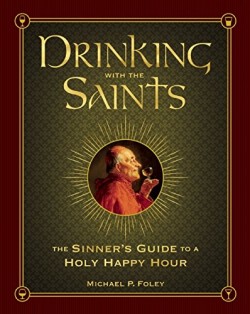 The history of the Catholic Church is notable for its litany of penitent saints who have taken their fasts- locusts, honey, Ezekiel bread- as seriously as they have taken their feasts. When I informed my family of my decision to convert to Catholicism after five years on the edge, their response was that of reluctant resignation as they wondered why I would sign up for a faith so strict in its manners and morals. What my parents did not realize was that amid the tradition of spiritual severity, sacrifices, and sufferings is a centuries-old tradition of feasting. The forty days of Lent that served as a prelude to my conversion- without meat or alcohol- led to a celebration of the faith that was just as joyful in its Easter feasting as it was strict in my Lenten fasting.

Three of my personal favorite feast days on the Catholic calendar all fall within one week of each other. In October, the Church celebrates Saint Teresa of  Avila, Saint Margaret Mary Alacoque, and Blessed Karl of Austria. Foley’s Drinking with the Saints tells you just how you can mark the feast days of your favorite moral heroes by incorporating a customized cocktail, curated specifically for the feast of the day.

Teresa of Avila, for example- mystic poetess and reformer of the Carmelite order- who both reformed and established hundreds of monasteries across Spain in the 16th century- can be celebrated with a drink called “Carmelite Water,” a neutral alcohol macerated for two weeks with the dried flowering tops of lemon balm, its zest, and angelica roots. The cocktails curated for feasting with the saints range from the complicated Carmelite Water to the less complex “Silent Monk” (Benedictine liqueur, cream, and Cointreau). In the prelude to the cocktail, beer, or wine Foley recommends readers pair with the saint of the day, he presents an insightful and brief biographical sketch of each saint.

After five years of perusing anthologies of the saints, I can say with confidence that this tome should be the definitive volume for any person who is both an alcohol enthusiast and a devotee of the saints. If any book on the lives of the saints can piquein a general audience an interest in pursuing holiness, this is the one. The book is filled with “last call” captions, which provide additional suggestions for the host: “St. Theresa had a wonderfully dry sense of humor, and is reputed to have once said: ‘Lord, save me from sour-faced saints.'” Foley writes: “Make this prayer your own tonight by turning it into a toast as you vow never to confuse life-giving sanctity with buzz-killing sanctimony.”

If you’re worried that Foley limits his cocktail curating to ordinary time, there are specific sections in the back for the liturgical seasons, including Advent, the twelve days of Christmas, and Lent. One of the more humorous saint stories is that of Roman noblewoman, Saint Bibiana, patroness of headaches, epileptics, and hangovers:

“Just when it looked like the Church would no longer suffer persecution from the Romans thanks to Constantine’s Edict of Toleration, Julian the Apostate became emperor and renewed imperial hostilities (Hell hath no fury like an ex-Catholic). How fitting that we pray to the patroness of hangovers two days after the scotch, ouzo, and vodka blowout on St. Andrew’s.”

Bibiana has become, for friends of mine in Washington, a patroness of happy hours for single Catholic ladies. For those of you who prefer to drink at the altar of brunch, raise a toast to Saint Scholastica, whose signature cocktail is the mimosa. “On St. Scholastica’s Day,” Foley writes, “bright yellow mimosa flowers are distributed by Benedictine monks after Mass, since mimosa is the official flower of St. Scholastica. Why not have the eponymous cocktail as homage to this charming custom?”

As a consumer of mostly wine and beer, Drinking with the Saints has inspired me to step outside of my comfort zone and try drinks like the Sweet Maria (Amaretto, cream, and vodka), which is as sweet as it is counter-cultural. This one is named after Maria Goretti, a young girl who chose martyrdom over the sexual advances of a lustful man. Beyond the Catholic cocktail recipes throughout this book, there are substantial recommendations for beer and wine.

The Sierra Nevada brewery, for example, makes Ovila Abbey Ale in partnership with the Abbey of New Clairvaux in Vina, California. This beer is recommended, of course, for the feast day of Saint Bernard of Clairvaux. The Belgian-style ales at Ovila Abbey are made from ingredients grown by monks. So, If you are the type of hostess who meticulously plans and integrates every detail of your events with an overall theme, then hosting a party in honor of the “Mellifluous Doctor”, paring the Clairvaux abbey ale with an “Arise Amy Love,” named after one of his canticles and reciting the line from whence it came- “Arise, my love, my beautiful one, and come away” would be an example of full aesthetic integration par excellence.

The captivating historical account of the lives of the saints recounted with humor and a great cocktail, Foley presents a tome of wisdom that is fun, engaging, and inspirational. To honor a lesser-known Saint Francis, enjoy a glass of “Lizard Skin” on June 4, so named to commemorate his skin disease: Warm 1 jigger of brandy, pour it over a half of a hollowed-out Orange, and set it on fire (extinguish before drinking). Coincidentally, the rooftop event at which Michael P. Foley presented Drinking with the Saints in Washington, D.C.. last month was hosted by the Catholic Information Center, which was instrumental in my recent conversion to Catholicism. Three years attending CIC events, a year in the Leonine Forum, and a few glasses of wine later, Foley’s talk served as the perfect bookend to my wine-filled journey to Rome.

Perhaps it’s no surprise that a scholar of Saint Augustine serves as the perfect Virgil on our journey through a liturgical year of drinking with the saints. And should we D.C. Catholics consume an inordinate amount of alcohol in the process, there’s always the option of confession at the CIC.