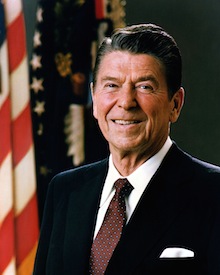 Ronald Reagan was an American actor turned politician, who served as the 40th President of the United States serving from 1981-1989.

Ronald Wilson Reagan was a native of Tampico, Illinois. He attended high school in nearby Dixon and worked his way through Eureka College, where he studied economics and sociology. Upon graduation, he became a radio sports announcer. A screen test in 1937 won him a contract in Hollywood. During the next two decades he appeared in 53 films.

From his first marriage to actress Jane Wyman, he had two children, Maureen and Michael. Maureen passed away in 2001. In 1952 he married Nancy Davis, who was also an actress, and they had two children, Patricia Ann and Ronald Prescott.

As president of the Screen Actors Guild, Reagan became embroiled in disputes over the issue of Communism in the film industry. In 1966 he was elected Governor of California by a margin of a million votes; he was re-elected in 1970.