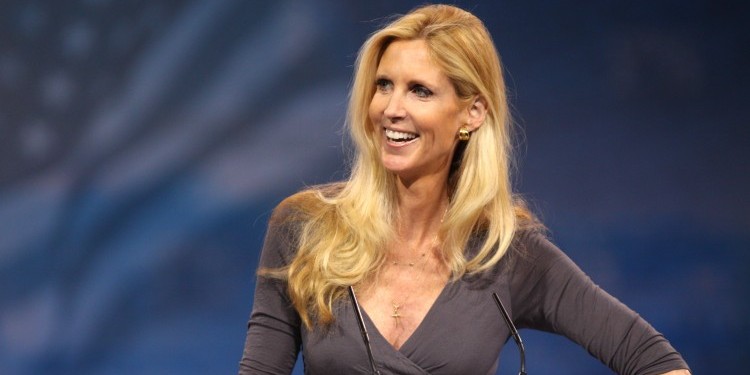 Congratulations Ms. Coulter on your new book, Adios America!: The Left’s Plan to Turn Our Country Into a Third World Hellhole!  Can you give us an overview of your book, and tell us what your inspiration was?

Thank you!  I had begun writing a different book altogether and had even written a couple draft chapters when I started looking for some basic facts for the immigration chapter — and the facts weren’t there.  I uncovered a massive cover-up by the media and our own government, to hide what they are doing to this country with immigration.

1.)  There is no more important issue than who gets to live and vote in America.

2.) Utterly primitive cultures, a thousand years behind America in their concept of freedom, individual rights and respect for women, are being dumped on our country as a result of Teddy Kennedy’s 1965 Immigration Act, which was an attempt to move the country in a leftward direction.

3.)  Every elite group in America – the media, the churches, the nonprofits, Washington lobbyists and both political parties — conspire to continue this destruction of the greatest country in the world for their own selfish reasons.

Not only do you go after La Raza and the Democrats, but you also spend some time attacking Republican businessmen for helping to create the current illegal immigration situation we’re in.  Could you explain more about this?

Other than a handful of principled Republicans, such as Senators Jeff Sessions, Tom Cotton and Ben Sasse, and beloved Rep. Steve King, almost all elected Republicans are determined to give the Democrats total political hegemony through immigration.  They care more about pleasing corporate donors and getting TV spots than they do about the country.

I guess they’ve done the math and figure that the millions of poor, welfare-receiving immigrants coming in won’t start voting for at least another seven or eight years and, by then, they’ll be retired.

A lot of people know Ann Coulter as the conservative “firebrand” or “political commentator.”  Can you tell us a little bit about yourself, where you grew up, and how you got interested in politics and writing?

I grew up in New Canaan, CT and came out of the womb suspicious of liberals.

Who gave you your first break in writing/publishing?

Regnery Publishing!  I’d been writing about Clinton’s various scandals for Human Events, Regnery’s sister company, so Regnery came to me and suggested to write a book on Clinton’s impeachable crimes.

I took a 2-month leave-of-absence from my law firm to write it—then left the law firm when it came out, and I suddenly realized you have to promote a book.  That was the beginning of my many years of unemployment.

A few are: Brent Bozell, Jr. (ghostwriting for Barry Goldwater), Joe Sobran, Emmett Tyrell; two of my college professors, Jeremy Rabkin and Alvin Bernstein; and the great M. Stanton Evans – to whom this book is endorsed.  And of course, my favorite books are Matthew, Mark, Luke and John.