Adios, America!: The Left’s Plan to Turn Our Country Into a Third World Hellhole 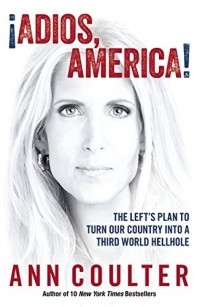 For most Americans, immigration is just one of a cornucopia of issues in the mosaic landscape of election issues.  For Ann Coulter, this issue is the one that will decide the future of America’s existence as a nation but isn’t debated nearly enough.  The mere mention of securing the border or tightening restrictions to filter out illegal immigrants brings the howls of La Raza and other activists (some often illegal immigrants themselves).  Her premise is simple – immigration is being used by Democrats for votes and businessmen for cheap labor.  It must stop now or America as we know it will be no more.

Coulter comes at the immigration issue with a shotgun blast of news items, statistics, and investigative reporting that rips the veil of secrecy off the media cover up of the immigration reality in America.  She levels blame at the media, big business, Republicans and Democrats for misleading the American people.  Coulter shows how easily Third World criminals are not only gaining entry in the United States but bringing their backward, and sometimes, barbaric cultures with them.

Through deep research, Coulter uncovers stories detailing horrific crimes perpetrated by legal and illegal immigrants long since ignored by The New York Times in favor of another fake fraternity rape case.  Since the current U.S. government’s weak immigration policy doesn’t force assimilation into American society, these “barbaric” cultures are infused into communities and are destroying the very nature of American culture.

Even worse, this destruction is defended by advocate organizations like the ACLU with a battle cry that “diversity is a strength!” and opponents are called racists.  With fact after fact and story after story, Coulter nails her point that a true and honest debate about immigration is what the American people need, and must demand.

Coulter makes the assumption that most Americans don’t know the truth behind immigration or the depth of the destruction to America.  Why? Because the media, politicians, Wall Street, big business and immigration advocates bury the facts.  They demonize those that oppose giving illegals healthcare, welfare, driver’s licenses, and in-state tuition.  The American people are told fairy tales about America being a nation of immigrants while the INS pencil-whips immigration protocols to offer rapists, sex offenders and murderers asylum. Ann Coulter  exposes the dark underbelly of immigration and highlights the hypocrisy foisted on the American people by the media and politicians.

Coulter’s book is an eye-opening journey through history and culture, shedding light on the truth about immigration in America.  For some, this will be a breath of fresh air.  For others, it will be a jolting smack in the face.  Coulter’s humor and hard dose of reality is a must read for all Americans disturbed about immigration and its impact on America.  It’s also for those who blindly follow The New York Times, Democrat X or Republican Y and can’t figure out why the borders are still wide open while illegal immigrants are getting law degrees at American universities and politicians demand Americans reward them with citizenship.

CBC original book review written by Major Michael C. Anderson, USMC (retired), who is a subject matter expert in national security policy, received a Master’s in National Security Affairs from the Naval Postgraduate School, and is a graduate of the U.S. Naval Academy.