Never Trust a Liberal Over Three – Especially a Republican 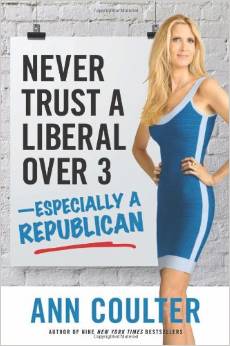 It takes a long time to edit and publish a book, so there’s no way Ann Coulter’s latest collection of essays, “Never Trust a Liberal Over Three – Especially a Republican” could have been perfectly timed to coincide with the great shutdown drama. It just worked out that way.

Some of these essays predate the Obama Administration, but still foreshadow both Republican and Democrat tactics during the shutdown battle. As the title would imply, Coulter has some stern criticism for the squishier precincts of the Republican Party, which she encourages to adopt effective Democrat tactics without embracing either their ideology or their sleaze. She chastises Republicans for whining about unfair media treatment – that’s the way the world works, and the GOP needs to deal with it, instead of waiting for some non-existent cosmic referee to throw a penalty flag.

Coulter is particularly vigorous in warning against the dangers of “comprehensive immigration reform,” which she’s not shy about portraying as the fatal mistake that would finish Republicans off for generations to come. Embracing amnesty is the surest way to end up on her rhetorical dartboard. After smacking around GOP amnesty enthusiasts early in the book, she grants the topic a chapter all its own. One of the essays in this chapter is entitled “America Nears El Tipping Pointo.” Anyone waiting for Ann Coulter to genuflect before the altar of political correctness has a long wait ahead of them.

There’s an important intellectual point underlying Coulter’s gleeful, consistently hilarious tipping of liberal sacred cows. Thought control is generally a voluntary process – one must agree to be bullied. The first step in this process of voluntary acquiescence is to allow the dominant culture to declare certain topics sacrosanct (a concept Coulter happily bulldozes when discussing Supreme Court Justice Elena Kagan’s improbable claims that nothing was “sacrosanct” around her family dinner table.)

Before the Left can construct an ideological maze, it must browbeat us into giving it an exclusive franchise for the construction of intellectual barriers. You might feel bad about the surprised laughter Coulter’s barbs can produce. She wants you to feel bad about feeling bad. Liberal orthodoxy has far too much power to control us by deciding what is unthinkable. It’s remarkable how quickly the Left’s bullies run out of steam if you simply refuse to accept their judgments… something Coulter is scrupulous about never, ever doing.

There’s much talk these days about the need for Republican candidates to become better “storytellers.” In other words, rather than merely offering disconnected sound bites and isolated, wonkish policy proposals, they should create narratives that help average voters relate to their philosophy. Assuming they can put a coherent philosophy together, the big obstacle facing them will be the way liberal orthodoxy has already placed elements of the Republican story off-limits. For example, you’re not allowed to honestly discuss the effects of growing dependency and a collapsing workforce on the vital American work ethic, without facing accusations of heartless hatred and racism. Coulter is resolutely unwilling to let any element of her narrative be censored by her ideological opponents.

The strategy behind “Never Trust a Liberal Over Three – Especially a Republican” involves rattling “moderate” Republican cages good and hard during the first few chapters, then reminding them of both Democrat strengths and vulnerabilities throughout the remainder of the volume. Although she generally speaks well of Mitt Romney (sometimes even when referring to his 2008 campaign), it’s easy to see where his 2012 run could have been improved by following the advice she gives.

Coulter has some tough points to make about the 2012 election, including a meditation on the perils of holding an endless debate-stuffed primary that brings unlikely candidates and attention-seekers to the stage, at the expense of serious candidates (a qualification she generally reserves for senators and governors, preferably the latter.) She encourages Republican primary voters to focus on the task of winning elections, rather than seeking ideological purity, especially from Republicans who managed to win office in Democrat states. Some of that advice may not rest easily in the ears of those who view Mitt Romney as the latest in a string of milquetoast sacrificial lambs flung into the gears of the Democrat machine, but there’s always the danger of passing up on real political talent by absolutely refusing to accept that a candidate in the Northeast has to say things voters in the South don’t like. Electability is not easily defined, or easily balanced against the hunger for real leadership.

Democrats are aided in that quest by their remarkable willingness to forget everything their candidate said prior to last week, and a media that keeps its Memory Hole on standby. One of the goals accomplished by Coulter’s recall of older essays in her book is to show how some things never change. Also, it’s great fun to revisit Left-media firestorms from before 2009, and remember what they used to consider stop-the-presses Administration-threatening scandals. Obama wouldn’t have lasted six months under the standards they helpfully rewrote for him.

Coulter’s not asking anyone to forget her bad calls. In the course of a 2005 essay taking President Bush to task for nominating the under-qualified Harriet Miers to the Supreme Court, Coulter wrote, “Being a Supreme Court justice ought to be a mind-numbingly tedious job suitable only for super-nerds trained in legal reasoning like John Roberts.” Hey, nobody bats a thousand.

Lively new introductory material for each group of Coulter’s essays help to establish her themes, of which there are several beyond the titular motif of distrusting people who believe in winning political arguments to control the behavior of their fellow citizens by any means necessary. An especially relevant theme, given the crash-and-burn of ObamaCare, is the danger of entrusting power over our lives to a massive bureaucracy filled with people who cannot be fired, no matter what they do. Her point will be proved again by the complete unwillingness of the Obama Administration to hold anyone accountable for the failure of the Healthcare.gov launch. Accountability would require them admitting there was something truly wrong with the launch, and they do a pretty good job of pushing the public around by refusing to make even the smallest such concession. We have always been at war with the 404 errors of Eastasia.

As always with Ann Coulter’s work, “Never Trust a Liberal Over Three – Especially a Republican” is sharp, funny, relentlessly provocative – she knows how to throw a punch without telegraphing it! – and compulsively readable. Hopefully the GOP field in 2014 will give her fewer targets for satire when she puts her next book together.