Resistance is Futile!: How the Trump-Hating Left Lost Its Collective Mind 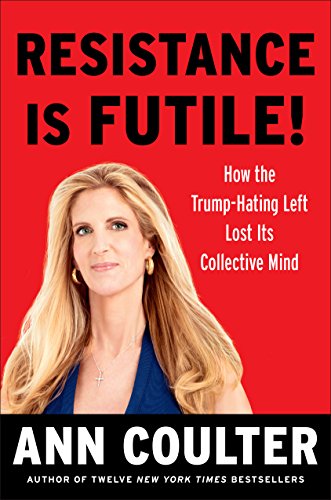 Since the day Donald Trump announced his presidential campaign, the left has waged an unhinged, hysterical war against him. Now, with her trademark candor and wit, Ann Coulter defends Trump’s policies in the face of liberal hypocrisy and exaggeration.

Liberals used to pride themselves on their ultra-hipness; they mocked right-wingers for supposedly overreacting to headlines and believing in conspiracies. But as soon as candidate Trump emerged, 100 percent of the moral panic has come from the left. They think everything Trump does isn’t merely wrong–it’s a national crisis.

While Trump governs mostly as a middle-of-the-road Republican, the so-called “Resistance”–journalists, comedians, movie stars, pro athletes, Twitter pundits, and even the Pope and Lindsay Vonn!–act as if they’re all about to be marched off to Dachau. They are literally shaking because Trump is literally Hitler.

Meanwhile, Trump obeys even unconstitutional limits placed on his presidential powers by judges in Hawaii. He has submitted, however irritably, to a hyper-politicized Special Counsel. He meets with Democratic Senators Chuck Schumer, Dick Durbin, and Diane Feinstein and showers them with praise. IT’S RIGHT OUT OF THE MEIN KAMPF PLAYBOOK!

Coulter reviews the various elements of “The Resistance”–the pussy-hat brigade, the Russia-collusion witch hunters, the media alarmists, the campus hysterics, and more. They talk about Russia? They’re the ones meddling with our democracy by trying to overturn the results of the election with relentless attacks and demented conspiracy theories.

The only permanent result of the Trump era may be our cultural institutions’ total loss of credibility.