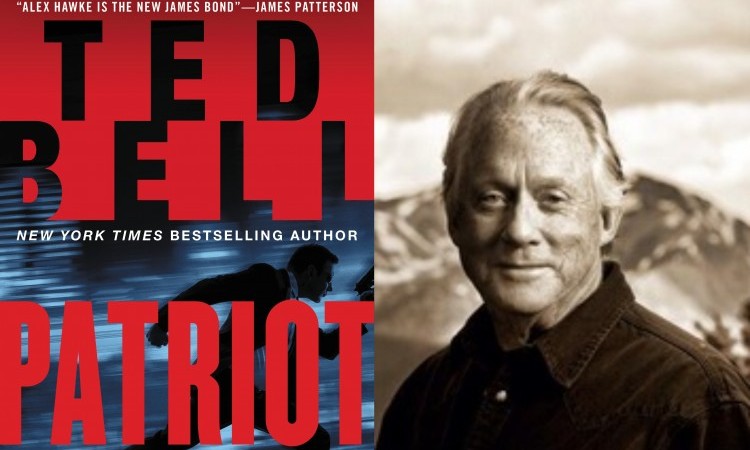 Alex Hawke is the conservative James Bond! Read our exclusive author interview with Ted Bell as he takes on Vladimir Putin and Russia’s recent aggressive territorial expansion. Learn why Putin still has an 80% approval rating even though the Russian economy is on the brink.

Congratulations Mr. Bell on your new book, Patriot: An Alex Hawke Novel!  Can you give us an overview of your book, and what was your inspiration in writing it?

I was always interested in turning Putin into a fictional character in order to explore his personality. In 2007 I went to Moscow, St. Petersburg, etc., to begin researching this character. Friends in the intelligence community and at our embassy in Moscow gave me a lot of help. Interviewed ex-KGB generals and other relevant players.

The result was TSAR, my spy novel published in 2008. The plot has my MI6 officer, Alex Hawke meeting Putin in prison after a failed Kremlin coup. Because of Hawke’s attempts to prop up Putin, he saves the British agent’s life and they become fast friends. An interesting literary conceit I think.

In my new Putin book, it’s 2015. Times have changed and so has the Russian president. Things I warned of in 2008 have come true. The belligerent aggression, the territorial grabs, Putin trying to return Russia to former glory as a quasi-Soviet super state. In TSAR, I cut Putin a lot of slack. In PATRIOT, I take my slack back.

Much of your book revolves around the threat of a reckless Vladimir Putin regime in Russia – not such a crazy premise in today’s world.  What do you believe is Putin’s ambitions for Ukraine, Estonia, Latvia, and other former Soviet blocs, and how should the US and Europe respond?

Putin’s motivation is simple. He’s a revanchist who wants to restore his borders to those of the Soviet Union. He’s only one bridge away from Estonia, and our former ambassador there, Amb. Dave Philips told me in Talinn, he wakes up each day expecting to see columns of Russian tanks coming over that bridge. It’s not “how” the US and NATO respond, it’s “when” they will respond. This administration has shown no inclination to stand up to Russian aggression—at all!

Why do you believe Putin retains such popularity in his country even when his economy is teetering on the brink of recession?

It’s quite simple. Russians love and respect nothing so much as strength. And patriotism, love of Mother Russia. Putin exhibits all these and more, having turned himself into an iconic modern day Peter the Great. Living now in desperate straits, they cling to the notion that the Great Hero will see them through in the end. They will endure any sacrifice to see that brave new world. That’s why he’s at 80% popularity, even now.