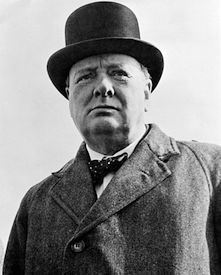 Winston Churchill was a British politician who was the Prime Minister of the United Kingdom from 1940 to 1945 and again from 1951 to 1955. Widely regarded as one of the greatest wartime leaders of the 20th century, Churchill was also an officer in the British Army, a historian, a writer, and an artist. He won the Nobel Prize in Literature, and was the first person to be made an honorary citizen of the United States.

At the outbreak of the Second World War, he was again appointed First Lord of the Admiralty. Following the resignation of Neville Chamberlain on 10 May 1940, Churchill became Prime Minister. After the Conservative Party lost the 1945 election, he became Leader of the Opposition to the Labour Government. After winning the 1951 election, he again became Prime Minister, before retiring in 1955.

Churchill married the former Clementine Hozier in 1908. They were married until his death in 1965, and the couple had five children.