Check Out The Science Thriller You Need To Read This Summer (Interview: Michael Guillen) 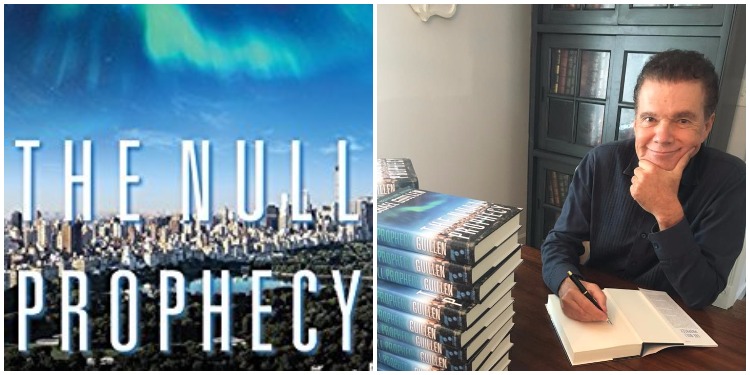 This summer has so many great books to choose from — but none offer as much science-packed action as Michael Guillen’s The Null Prophecy! We had the opportunity to talk to Guillen about his book, the science behind it, and about the political debate over climate change — read more below!

Congratulations, Michael, on your new book, The Null Prophecy! Tell us about it.

It’s a magilla of a thrilla’ – a perfect summer read!

The Null Prophecy is a contemporary, fact-based, thought-provoking, action-packed story featuring two young, high-powered protagonists; a large cast of supporting characters; exotic, international locations; and many head-snapping plot twists and turns. It grabs you from page one and keeps you guessing and on the edge of your seat until the final, spectacular scene.

Do I have your attention? ?

Allie Armendariz, a physicist-turned-correspondent, meets Calder Sinclair, a reclusive inventor who has created a headline-grabbing vehicle that promises to forever change how we travel long distances. Allie is a baby Christian who is struggling with not just her faith, but her family and personal life. Calder is a hard-core secularist who is angry at God, and for plenty of good reasons.

When things in the world begin unraveling – starting with a hole in Earth’s magnetosphere above the north pole – Allie and Calder are thrust together unexpectedly. As world leaders gather in San Diego for a G20 summit, things go from bad to worse and Allie and Calder must step up to save the world. But their growing romance and fundamental differences threaten to make a very dire situation even worse.

In your book, you get into some really deep questions about science and its unintended consequences.  Is there a message you’re trying to get across to your audience?

My middle-school math teacher called me Michael Jillion, because I drove him crazy with my constant questions. Becoming a physicist has been a great way to satisfy my insatiable curiosity about everything. Indeed, I believe science is the most brilliant method we have for understanding the physical universe.

Also, science has improved our lives in countless ways. My mother lived for five years after being diagnosed with stage-four breast cancer because of medical science. Cell phone communication saves lives every day. Industrial robots spare humans from performing dangerous tasks, such as handling molten metals or radioactive materials.

Tragically, there is a glaring downside to science – namely, its ugly, unintended consequences. Antibiotics have given us super bugs. Nuclear energy has given us weapons that can wipe out entire cities in the blink of an eye. Computers have given us vicious ransomware and cyberwarfare. Electricity has given us EMPs. Automation has given us burgeoning unemployment. All of it rightfully leaves us wondering: are we really better off today than we were before the industrial revolution?

We live longer, so one quick answer is, yes. All in all, science has been good for our health and wellbeing. But our longer lives are now under a greater constant, lethal threat than ever before.

So, is science the means by which we will end the world? There is certainly room for lively debate – and well there should be, lest we go down completely oblivious to the growing dangers. For my part — a physicist who loves science – I consider it significant that we now live at a time when such a question must be taken seriously.

That, I submit, is answer enough.

What’s your take on the scientific consensus that climate change (or global warming) is mostly man-made and will ultimately lead to earth’s destruction?

Yes, there is presently a strong, well-publicized scientific consensus that humanity’s environmental slovenliness is largely to blame for the observed warming of Earth’s atmosphere—roughly 1.4 degrees Fahrenheit since 1880, according to NASA’s Goddard Institute for Space Studies. The consensus is based on observations of temperatures around the world, our understanding of the greenhouse effect—the proven warming caused by certain gases, such as methane, water vapor, and carbon dioxide – and computer modelling of the ultra-complex interactions among land, air, and water.

A scientific consensus must always be respected and considered carefully – but never treated as infallible. It is far from being that, a lesson I learned early in my scientific training and that comes through loud and clear from history.

For more than eighteen hundred years, starting with Aristotle, the prevailing scientific consensus was that the sun revolves around the earth. So powerful was that collective expert opinion—so clearly did the facts appear to affirm it—that even the Catholic Church bought into it, eventually leading it to prosecute Galileo, who dared to challenge the consensus. With time, scientists and the Church discovered the error of their ways and recanted.

Especially unreliable is any scientific consensus that claims to predict the long-term behavior of something as complex as the climate. Not only are there a dizzying number of positive and negative feedback mechanisms that even supercomputers have a hard time juggling, many of them are fundamentally unpredictable. In science-speak, the climate system is chaotic.

That discovery belongs to the famous MIT meteorologist Edward Lorenz, who in the 1960s found that the interactions of land, air, and water are so techy slight differences in our assumptions about them can lead to vastly different predictions. Even the ultra-orthodox Intergovernmental Panel on Climate Change (IPCC) acknowledges the problem. “The climate system is particularly challenging since it is known that components in the system are inherently chaotic,” the IPCC says. “There are feedbacks that could potentially switch sign, and there are central processes that affect the system in a complicated, non-linear manner.”

MIT’s noted atmospheric scientist Kerry Emanuel says of Lorenz’s pioneering discovery: “By showing that certain deterministic systems have formal predictability limits, Ed … fomented what some have called the third scientific revolution of the 20th century, following on the heels of relativity and quantum physics.”

Nature’s fundamental unpredictability is just one reason science will never be good at predicting the long-term future of a complicated system; another reason is simply that science doesn’t know everything. That is why a scientific consensus, however strongly it is held and presented, must always be approached warily. “No amount of experimentation can ever prove me right,” explained Albert Einstein, “a single experiment can prove me wrong.”

I like the way the late Nobel Prize winning physicist Richard Feynman put it in his book What Do You Care What Other People Think? “If we suppress all discussion, all criticism, proclaiming ‘This is the answer, my friends; man is saved!’ we will doom humanity for a long time to the chains of authority, confined to the limits of our present imagination,” he said. “It has been done so many times before.”

I say, let Feynman’s wise words be a warning against anyone mindlessly buying into a scientific consensus, including today’s on climate change. For unless we move forward intelligently and skeptically, we risk going the way of the seventeenth-century Catholic Church and finding ourselves on the wrong side of truth.

Tell us about your writing process.  Do you write at a regular time each day, or when you feel inspired, etc.?

By nature and by training as a scientist and reporter, I am disciplined. When writing a book, I have a schedule, which begins early every morning. Usually I write for four-plus hours, take a break, then edit for about four hours whatever I wrote the previous day.

Away from my computer, I am constantly working on the book in my head – although I try to not let that interfere with my social life. ? While holed up, my wife is great about keeping me well fed and hydrated and shielding me from distractions. I couldn’t do this without her. We’re a team.

I never get writer’s block. Every day I type whatever comes into my head. If it’s garbage, no worries, I will edit it into polished text by and by. The key is to start somewhere.

The Null Prophecy is my first novel. I love writing fiction because I have so much more creative freedom than when I write nonfiction. I wanted The Null Prophecy to entertain readers, but also to make them think about what’s happening in today’s world, so it is quite factual. Nevertheless, I had the freedom to create fascinating characters, behaviors, locations, circumstances, and I loved it! I’m already sketching out a sequel, in the hope readers will fall in love with Allie and Calder, the way I did.