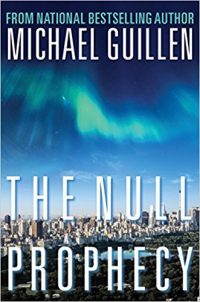 Michael Guillen’s newest book, The Null Prophecy, mixes science and faith as two characters with distinctly different takes on religion and a shared love of science race around the world to try and prevent an apocalyptic event. Calder Sinclair and Allie Armendariz are likeable protagonists that become more so as they bundle up into Hero, their transportation from continent to continent, and attempt to hold off a deadly eruption of solar radiation made all the more dangerous by the newly discovered holes in the magnetosphere.

If you’re put off by the science driving the plot and afraid you won’t be able to keep up, fear not. Guillen, a former professor turned science correspondent, is able to explain everything from the Aurora borealis to the quantum vacuum with ease. By the end of this novel, you’ll feel a lot smarter than many of the characters in this book and comfortable explaining the science behind the book. For those wanting more information or skeptical of the validity of the claims Guillen makes, he provides sources for further investigation.

The cast of characters is rounded out by a US president who puts far more faith in scientists than we’ve seen recently, a devout Spanish nun, and a Mark Zuckerberg-esque wunderkind who serves as a villain, not because of his capitalist tendencies (which is a welcome change of pace,) but because he actually takes evil and unwise actions that align him more with Bernie Sanders than Elon Musk.

If being stuck inside of a small ocean vehicle with two characters for 400+ pages makes you feel claustrophobic, let your feelings be assuaged by the different points of view that offer insight into the looming apocalyptic event from corners of the world including the Arctic circle, San Diego, California, a Chinese university, and a Spanish convent. Each sector of the world offers a cast of characters playing their own roles in the impending disaster, both attempting to survive in the face of the worst case scenario and contributing to the inevitable chaos of at-risk locations.

The Null Prophecy combines science and faith, something that many science fiction novelists are all too eager to eschew, because Guillen recognizes that in the face of disaster, many people, very religious and not so much, will turn to God. It came off as a much more realistic depiction of people dealing with a looming threat than a novel that avoided all talk of religion. Each character approaches the countdown to impact differently throughout the book, but some of the most thought-provoking moments are Calder and Allie, alone, discussing the role of faith in their lives as scientists.

Guillen keeps the book rolling quickly with a running countdown to impact that shifts minutely as we see the same moment through the perspective of different characters, which allows for a more robust story and the development of the plotline outside of Allie and Calder alone.

If you like science fiction, apocalyptic fiction and novels that don’t eschew religion solely in the name of science, pick up The Null Prophecy wherever books are sold.