Conservative Book Club » Humor & Popular Culture » America Alone: The End of the World As We Know It

America Alone: The End of the World As We Know It 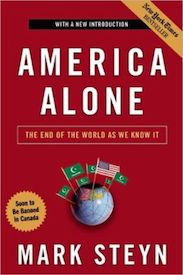 Are you ready for a conflict between America and the rest of the world? In “America Alone: The End of the World As We Know It,” Mark Steyn (the most widely read and wittiest columnist in the world today) argues that that’s just what’s coming. European and Islamic anti-Americanism, he explains, threatens to leave us isolated in the world: the global situation is rapidly reaching a point at which America will have to confront the enemies of civilization without help from anyone else. And when the world is divided between America and the rest, all those who don’t want to see the world shrouded in a new Dark Ages should hope that America wins.

Steyn argues forcefully that much of the Western world as we know it will not survive the twenty-first century, and much of it will effectively disappear within our lifetimes — including many if not most European countries. He shows how this process is already well advanced, and explains that whether we like the New Order in Europe and the world depends on whether America can summon the will to shape at least part of the emerging global picture. If not, then it will mean the end of the American moment and the beginning of the new Dark Ages: the return of much the planet to a primitive state.

America is facing this life-and-death challenge, says Steyn, because of the Western world’s demographic decline; the unsustainability of the welfare state in Europe (as well as in the United States, Canada, and Australia); and the apparent exhaustion of Western civilization. Suffused with Steyn’s trademark wit and piercing insights, this book calls on us to summon the will to fight this great struggle for Western civilization. In “America Alone,” Mark Steyn provides an enlightening primer to just how bad things are likely to get, and what we must do now to ensure that our children and grandchildren live in the bright light of freedom.

Illuminated with wit and wisdom by Mark Steyn:

Tags: America Alone: The End of the World As We Know It, Mark Steyn