America’s Blessings: How Religion Benefits Everyone, Including Atheists 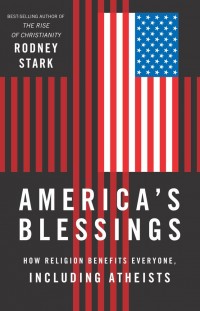 Is Christianity in rapid and inevitable retreat, running for the hills?  Is America’s post-Christian status cemented, requiring only a Requiem Mass?  Has the ground shifted overnight?  Recent news reports suggest or seem to hope as much.

Enter Rodney Stark, a longtime sociologist of religion, lately at Baylor University, to report that nearly everything taught about the faithful is wrong.  His scholarly work, America’s Blessings (2012), can be read as an academic and statistical defense of American religion.  Who knew that religious types are better citizens and students, more generous (even considering secular charities), less prone to crime, depression, and domestic violence, nicer, more steadily employed, and even shown to have better sex lives?

Stark seems to have the field to himself as there are few scholarly advocates of religion’s benign effect on society. At various points in the book, he explains how he’s the only one to have measured some data subset or weighed certain effects of religious practice.  With facts and some boldness (defending corporal punishment, criticizing Head Start), Stark documents that America benefits immeasurably from the devotion of its believers.  He estimates that the fiscal savings alone amount to $2.67 trillion per year, largely in negative pathologies avoided by religious-based conduct.  If it didn’t exist, religious practice would need to be invented. If it were a social program, perhaps modified with the adjective “Great Society,” it would  be smothered with excess funding.

With mathematical precision, Stark demonstrates that weekly attendance, a manifestation of strong commitment, results in nearly unqualified positive effects of religion across races, regions and income groups.  Compared with Western Europe, the US benefits from a significantly higher practice of religion. This may not surprise the devout, but Stark repeatedly points out that other scholars and the mainstream media often ignore this fact when they do not misrepresent the conduct of the faithful.  Most secularists cannot credit or even comprehend the power of the religious.

Stark reinforces what has been long known: mainline Protestantism forfeited its core beliefs a half century ago and hemorrhaged members to non-denominational upstarts.   Stark’s book also highlights academic/ media bias and thus complements two works in the last generation he doesn’t mention. The first being The Naked Public Square (1984), in which Richard John Neuhaus lamented the danger of stripping eternal principles from temporal debate. And the other,The De-Moralization of Society (1995), in which Gertrude Himmelfarb similarly bemoaned  the abandonment of a shared moral vocabulary.

America’s Blessings is a relatively short book that could go further. I would have liked a breakout of the much-maligned Evangelical Protestants (or “Evangelical Christians” as author describes them and as some Catholics so self-label). Since the Scopes trial of 1925, this group has been on the defensive to varying degrees.  Are Mormons, Muslims and Methodists (to pick a few) all equal in their contribution to American goodness?  Furthermore, Stark doesn’t take up the topic of how religion helps. Is prayer powerful? Is grace irresistible?

His discussion of how some communities miss the benefit of its devout opens the door to disturbing at-large societal trends. Stark hints at this in discussing why some religious kids’ good conduct in the Pacific Northwest does not show the same positive effect as similar kids in other regions. He blames “moral communities” that undermine their example (p. 48). If this is the case, could the larger advance of secularism be eroding the contribution of the faithful?

The more troubling takeaway from Stark’s book is the possibility that his documented successes of the faith might be largely an artifact of a vanishing era.  Stark cites survey data showing the percentage of atheists has held steady for 1944 to 2007.  Others, notably Ross Douthat, point that church membership has not receded in recent years. But, cultural Christianity (Christendom) is retreating at a rapid rate, with Christians fleeing for their lives in the Near East and some of Africa.  Some of secularism’s domestic victories are seemingly minor, nearly invisible, but the relentless march continues.  The public has been outraged by a Supreme Court decision now and again.  Engel v. Vitale (1962) outlawing school prayer (which he does not mention) comes to mind. But we acquiesce nonetheless.

At home, there has been at least a century-long, largely successful effort to stifle, silence, and squelch robust religious exercise, particularly involving public advocacy.  Religion’s political application, social conservatism (notably in the area of sexual restraint), seems gravely threatened by defeat and desertion.  Opposition to gay marriage, the most prominent example, has gone from nearly universal to a virtual “hate crime” in scarcely a decade in the West.

Stark’s research highlights the high number of “other/ none” adherents who believe in the occult and even Bigfoot.  Thus, today’s secularism is a metaphysical belief system, a rival worldview that can only be described as religious. If the First Amendment’s overplayed disestablishment clause means anything, it should also apply to the false gods of humanism.  This viewpoint must not be advanced by public policy.

America’s Blessings convincingly and emphatically makes the case that God has shined His grace on America.  Religion in the US is a positive good that should be encouraged if only for its societal benefits.  But this emphasis hasn’t moved enough of our fellow citizens to respect religion’s role.  The age-old appeal of its Truth could be an effective last resort, so to speak.  While piety is an archaic and unflattering word, Stark effectively makes the case that it has made America significantly better, a lesson unappreciated by most.