How the West Won: The Neglected Story of the Triumph of Modernity 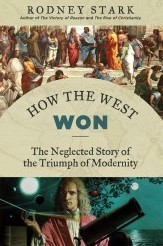 One of the most striking traits of American and European academics is a kind of masochism that manifests itself in books celebrating the superior claims of cultures not their own. Fortunately, a few unapologetic defenders of Western civilization can still be found. In “How the West Won,” Rodney Stark details how and why the vital aspects of modernity—defined here as a combination of sensible economic arrangements, political freedoms and scientific knowledge—developed in the West rather than elsewhere. In the process he adds considerably to the content of the old Western Civ courses, which would often discreetly ignore the contribution of Christianity and neglect practical matters such as advances in technology and banking.

Surveying the great empires of the past—Egyptian, Roman, Ottoman and Chinese—Mr. Stark identifies as their common denominator the greed of the ruling classes, who thwarted their subjects’ motivation to produce with confiscatory taxes and lawless seizure. Without property rights, people could only hide and hoard. These empires built great public works through forced labor, but their populations were stuck in poverty for centuries.

Busily consuming rather than investing, imperial elites saw work as degrading: As a sign of their superiority, the Mandarins had their long fingernails encased in silver sheaths. And the elites were generally hostile to invention and improvements in technology. China is credited with inventing the blast furnace, Mr. Stark notes, but in the 11th century the Chinese court killed a budding private iron industry as a threat to its rule. In 1485, the Ottoman Empire banned the printing press. Both the Chinese and the Ottoman empires forbade the mechanical clock.

Mr. Stark contrasts such balkiness to medieval Europe’s ready adoption of new technologies such as gunpowder, the blast furnace, watermills and windmills. “Invention per se is not the most crucial factor to consider with technologies,” he says. “More crucial is the extent to which the culture values inventions and puts them to use.” In Europe, the culture was defined by Christianity.

The link between Christianity and a dynamic economy was famously outlined by Max Weber in “The Protestant Ethic and the Spirit of Capitalism” (1904-05). By combining restraint with a striving for profit, Weber argued, the “frugal entrepreneur” in Protestant Europe hit upon a mighty engine for growth, avoiding asceticism on the one hand and profligate consumerism on the other.

As elegant as this theory is, Mr. Stark notes, historians have long known that the birth of capitalism lies further back in time, in what is referred to as the Dark Ages, when Europe was supposedly benighted by the narrow doctrines of the early medieval church. Mr. Stark is having none of it. Capitalism’s source, he says—and the seeds of modernity itself—can be found in Christianity’s emphasis on reason and free will. Toaism, Confucianism and Buddhism dissolve in vague mysticism, he says, while for Muslims doctrine is forever fixed, and the main task of their clerics is to enforce the commands of Allah. By contrast, one finds an eminent Christian philosopher like St. Augustine arguing that man can reach a deeper understanding of God through the use of his reason.

“The most fundamental key to the rise of the western civilization,” writes Mr. Stark, “has been the dedication of its most brilliant minds to the pursuit of knowledge.” Not only about God but about his whole creation. Hence Europe owes the founding of its great universities to the Scholastics, the medieval scholars of Christian theology. For Mr. Stark, “the Dark Ages is a myth invented by 18th century intellectuals determined to slander Christianity and celebrate their own sagacity. It was in this period that Europe took the great technological and intellectual leap forward that put it ahead of the world.”

In Mr. Stark’s telling, the teachings of St. Benedict, who branded idleness bad for the soul, helped nudge monastic estates toward an early form of capitalism. They invested the money earned from selling indulgences in farmland, which they cultivated using the latest methods. By the ninth century, about a third of the estates along the Paris part of the Seine had watermills, most of them on religious estates. The monasteries would also diversify, branching into banking and money lending; as Mr. Stark notes, they weren’t squeamish about foreclosing when a loan was not repaid.

For the first full-blown secular versions of capitalism, Mr. Stark turns to the Italian city-states of Genoa and Venice of the mid-12th century: As they developed as trading and manufacturing centers, power was extended down from the aristocracy, military and clergy to include merchants, bankers and representatives of the various crafts or trades, and the church played an active part in this democratization. In short, Max Weber’s Protestants did not invent something that the Venetians had not come up with long before.

It is true, Mr. Stark concedes, that the Counter-Reformation of the 16th century, with its emphasis on asceticism, was hostile to business and banking, a development that in turn lent credence to Weber’s Protestant-centered theory. It is also true that capitalism’s development in Europe was patchy. There was no lack of rapacious European despots, and modernity’s emergence was fitful. That Britain would go on to become the birthplace of the Industrial Revolution can come as no surprise, possessing as it did the right mix of freedom, property rights and an educated population. And it was equally natural that the U.S. should take over Britain position in the world, having been founded on the same values—many of them, Mr. Stark emphasizes, originating in religious belief and practice.

Review from The Wall Street Journal, written by Henrik Bering.