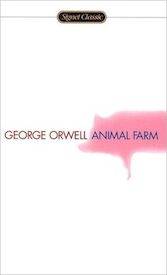 The leading figures in ”Animal Farm” are clever pigs, one of whom, Napoleon, has the propensity for evil, the paranoia and the greed for power found in despots throughout history. He is clearly modeled on Stalin, as his corevolutionary, Snowball, is the Trotsky figure of George Orwell’s tale, and as Squealer, his minister of propaganda, is modeled on those experts in the subversion of truth probably best exemplified, in a different totalitarian order, by Goebbels. The political structure of Animal Farm — the farm that gives the book its title — is very much that of Plato’s ”Republic,” with the pigs as rulers; a pack of fierce dogs as what Plato would call guardians, serving to enact and enforce the rulers’ will; and then the plain ordinary animals — horses, goats, donkeys, sheep, chickens — who, fired by a utopian ideal transmitted to them by a prophetic pig, old Major, undertake to create for themselves a life free of exploitation. In the beginning, the animals are totally exploited by their human owners. After their revolution, there is a brief period when the animals labor for themselves alone. By the end of the book, the animals might be said still to work only for animals, but they might as well be working for human farmers, since their animal rulers are the pigs, who now walk about on two legs, wear clothes, sleep in beds, swill beer and are exactly as exploitative as the humans they have replaced.

”A Fairy Story” is Orwell’s subtitle for the book, and it is made to order for a certain kind of illustration in which pigs can be shown as ridiculous, taking on more and more human attributes; and as evil, since they can, with a few wicked touches, serve as caricatures of various easily represented figures in Soviet history, which Orwell in part meant as the target of his allegory. The proportion that Orwell quite clearly had in mind — Soviet dictators are to human beings as human beings are to animals — makes ”Animal Farm” a pessimistic book only if dictatorship is the inevitable result of political revolution, and if, again, revolutions are inevitably, as the word implies, circular. Orwell’s message was not to beware of revolution but to watch out for the pigs, who may try to take it over. Even then, had the animals’ revolution fallen into the hands of Snowball rather than Napoleon — the Trotsky rather than the Stalin character in the book — life might have been as rosy as its promise in the speech of old Major, which ignited the misanthropy and the discontent of the proletarian beasts who made the revolution and endured its bitter consequences.

It was the unmistakable Soviet reference that more than 50 years ago made it difficult for Orwell to publish the book — initially because the publishers to whom he submitted it were, like so many intellectuals of the period, reluctant to see any bad word said about the one clear instance of socialist experiment, and then because, once the Russians were allies in the war against Germany, it seemed wrong to give aid and comfort to the enemy. It was doubtless the thinly disguised Soviet reference that gave the book its first tremendous popularity, inasmuch as its publication virtually coincided with the advent of the cold war. But the sustained acceptance of the book is testimony to a human meaning deeper than anti-Soviet polemics. The book very quickly entered the political imagination as a moral fable that showed how the most exalted social ideals are degraded when raw power continues to speak in the language of brotherhood, and how this entails the corruption of truth and meaning. Its famous example is the sad transformation of ”All animals are equal” — Item 7 in the Animalist Manifesto composed by Snowball and Napoleon — into ”All animals are equal but some animals are more equal than others,” a precocious example of what Orwell called Newspeak in his chilling masterpiece, ”Nineteen Eighty-four.”

”Animal Farm” may find a certain confirmation in the metamorphosis of Communist apparatchiks into market capitalists and racketeers, just as the seeming plasticity of truth that enables its cynical pigs to interpret and reinterpret the Animalist Manifesto has its counterpart in the giddier employments of deconstructionism. But these applications simply underscore the political universality of Orwell’s profound and affecting work, and we know that it will be timelessly timely, as long at least as human beings are what Nietzsche called human, all too human. Its unwavering appeal to readers has made it a steady seller in the half-century since its publication, and it is fitting that Secker & Warburg, the publisher that showed sufficient courage to bring the book out in August 1945, should have marked its golden anniversary with an opulently illustrated edition (published now in this country by its first American publisher, Harcourt Brace).

This new edition is as far a cry as can be imagined from the wartime austerity of the first. How fitting Ralph Steadman is as the book’s illustrator is a more complicated matter, though in truth, when I try to think of who would be the ideal illustrator, only Goya comes to mind, for the book requires the comedy of ”Los Capriccios,” with its absurdly humanized animals, and the violence of ”Los Desastros de la Guerra,” where human beings behave to one another like beasts.

Mr. Steadman is a master of a certain bravura caricatural style found chiefly in England, marked by blots and spatterings that testify to a highly energized brush or pen, employing, at its most successful, forms that are heavy black brushstrokes, accenting figures done with thin spidery lines. I suppose it is the task of illustrators to find visual equivalents to texts, with the images depicting what the text describes. But in ”Animal Farm” there is nothing verbal to which the blots and spatters might correspond, and, if the implied narrator should in fact be an animal, he or she is a far greater master of English prose than the draftsman of many of the illustrations in the book is a master of the drawn line. Orwell treated his animals with dignity and affection — I found tears coming to my eyes when Boxer the horse begins his descent into death. But Mr. Steadman’s drawings are in no sense equivalent in feeling to the text he has undertaken to ornament.

There really is a sense in which, graphically speaking, the pigs are more equal than any of the other animals. Mr. Steadman does not draw any of the other animals with anything approaching the vehemence with which he draws the pigs, unless we count humans as animals, which violates one of the commandments of Animalism (”Whatever goes upon two legs is an enemy”). The human animal is Mr. Steadman’s natural subject, and his drawing of the hapless Farmer Jones has some of the energy the pigs always have — which is a way of showing, I suppose, that we are pretty much pigs under the skin, a deep identity that has not escaped the attention of moralists before. It enables Mr. Steadman to bring off with great clat the moment when it becomes difficult for the animals, as it does for us, to tell in the climactic drawing, when the two groups meet, which are the pigs and which the farmers. But I would be more convinced that this was an intended commentary if I felt that the other animals were shown convincingly, as Goya showed them, or as Maurice Sendak does. In fact the drawings of the other animals are fairly undistinguished, as if for a down-market children’s book with no great budget for pictures. The two-page spread of the expiring Boxer is almost embarrassingly, well, lifeless.

”Animal Farm” is neither political cartoon nor children’s book. One thinks back, fondly, to the plain, unassuming book, small and thin, with warped covers and cheap paper, that was part of everybody’s library in the years after the war. Its story was self-illustrating, so to speak, for it was pictorial in a way that meant no actual set of pictures could capture and hold its meaning. It immediately established itself in the reader’s imagination, and in the reader’s political discourse. The book will survive all its editions.