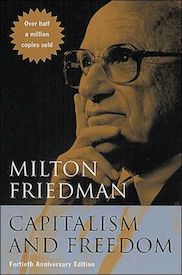 Professor Milton Friedman of the University of Chicago is a prin­cipled man. He lives in an unprin­cipled society. In this he is not un­usual; many of us are in the same fix. But in applying his principles Professor Friedman is quite un­like anybody else now writing. His latest book, Capitalism and Free­dom (University  of Chicago Press, $3.95), combines an exhilarating impudence with an ability to fasten upon the oddest sort of perspectives. Friedman never an­swers a cliché with a counter-cliché; he is always, on principle, outrageous. The ordinary believer in the welfare state must find his defenses in a shambles after read­ing Friedman on education, or on discrimination, or on social secur­ity. But the ordinary libertarian will also find his arguments in complete disarray as he seeks to square his answers with those which Friedman so devastatingly supplies.

What is the libertarian to think when Friedman says, for example, that the union shop is justified by the principle of free­dom of contract? Or when he says that the automatic gold standard would, if re-adopted today, prove a great disappointment, if not wholly disastrous? Or that gov­ernment, instead of giving aid directly to schools, should subsid­ize people for the education of their children by giving them vouchers cashable in any school they may happen to select? Or that we would have better medi­cine if there were no licensing of physicians in accordance with prescribed standards of training? Or that we might, to alleviate poverty, employ “negative” income taxation—i.e., make grants of money to individuals who earn less than a taxable amount of income in any given year? Or that gov­ernment should expand the cur­rency supply to take care of a stipulated annual rate of growth—say between 3 and 5 per cent?

Encountering propositions of this sort, the libertarian may well wonder just where Professor Friedman does stand in this busi­ness of relying on government to keep people from making mis­takes. But Friedman is ready for those who might charge him with inconsistency or willingness to compromise.

Professor Friedman bases his whole program on the ancient lib­eral (or modern conservative) principle that one man’s freedom to use his fist is necessarily limi­ted by the proximity of another man’s chin. But in the Friedman interpretation of the principle, the neighbor’s “chin” must be made symbolically to stand for what Frederick Hayek has called the “neighborhood effect.” It is an obviously unjustified “neighbor­hood effect” if you contaminate a downstream reservoir by pouring a poison into your own small up­stream pond. But there are other ways of “poisoning” the neighbor­hood than by dumping one’s wastes in a place that hurts the property next door.

Thus “ignorance” can have a “neighborhood effect” by creating an unstable society. Simply to save the literate from the stupidi­ties of the illiterate, Professor Friedman thinks the state is justi­fied in requiring that everybody have a certain minimum of school­ing. But his own principle of free­dom requires that this schooling should be provided by institutions freely selected by the parents of tomorrow’s citizens. Hence Pro­fessor Friedman’s championship of his voucher system, which would allow the private school to compete with the public school on equal terms. It would, incidentally, let southerners make their own in­dividual decisions on “integra­tion.”

Professor Friedman’s case for gearing the money supply to an agreed-upon rate of economic ex­pansion follows from his concern with the “neighborhood effects” of depression. The gold standard, he thinks, is deficient because it soon becomes a myth in an eco­nomic society that relies primarily on credit and fiduciary money of one kind or another. One trouble with gold is that there isn’t enough of it to support a world system; if it works well for one country, it will, by that very token, work badly for another. Profes­sor Friedman doesn’t even like a “gold-backed” currency, with “fractional reserves.” He would let the price of gold be set in the open market, and let anybody own it. Meanwhile, he would have Congress legislate a rule instructing the Federal Reserve System to expand the currency at a specified monthly rate.

If such a system had been in operation in 1931 and 1932, so Professor Friedman thinks, the 1929 depression would have had a relatively short duration. Follow­ing Arthur Burns, he argues that the Federal Reserve, acting on the wrong principles, did little or nothing to provide a staggering banking system with needed li­quidity. Indeed, the “Fed” proved to be a much less reliable bulwark than J. P. Morgan’s consortium of private bankers had been in the depression of the nineties or in the crisis of 1907.

Professor Friedman thinks his idea of alleviating poverty by dis­tributing funds through “nega­tive” income taxation would en­able the government to do away with a whole batch of expensive welfare activities. The poor farmer, getting a quarterly grant whenever his estimated income fell below a taxable point, would not need crop controls or support prices for his wheat or peanuts. The 70-year-old who lacks a pri­vate pension would get his living allowance without having to de­pend on a costly and bureaucratic system of social security. And the worker, guaranteed a certain amount of income through the workings of “negative” taxation, would not feel the need of minimum wage laws or of special pro-union legislation.

The libertarian, faced with com­ing to a decision on the Friedman program, must admit that it would have astounding virtues. It would automatically result in the closing of scores of Washington agencies and bureaus. Between them, the Director of Internal Revenue and the Federal Reserve Bank could handle practically everything.

The only trouble with the whole tissue of Friedman propositions is that it depends on establishing a prior consensus. But with every pressure group in the nation fight­ing to get it’s own particular defi­nition of “neighborhood effects” accepted, where would it all end? Many farmers think the “neigh­borhood effects” of below-parity wheat prices are pernicious. Egali­tarians think the presence of rich people spoils the tone of society—which is another way of implying that the “neighborhood effects” of flat-rate taxation of incomes is bad. Professor Friedman no doubt thinks it monstrous that the fed­eral government uses the “general welfare” clause of the Constitu­tion to justify many of the things it now does. But would it im­prove matters if the power to levy taxes to overcome bad “neighbor­hood effects” were to be substi­tuted for the power to tax for the general welfare?

I put this in the form of a ques­tion, for I myself accept the prop­osition that the freedom of my fist is limited by the proximity of the other man’s chin. Dazzled by Friedman, I am not at all certain at the moment where “chin” ceases to be a negotiable symbol for “neighborhood.” Tomorrow, when the mists produced by the charming Friedman rhetoric have cleared from my brain, I will prob­ably have things under control. But for the moment I have been staggered by the most provocative book on the current intellectual horizon. Read it and be all shook up.

Book Review from The Freeman, by John Chamberlain (May 1963)