Commentaries on the Laws of England 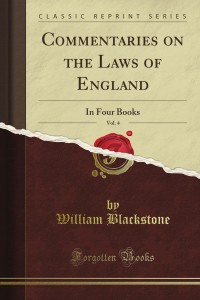 Blackstone was the first since Henry de Bracton in the 13th century to present an encompassing treatment of English law. The Commentaries (1765-1769), which grew out of Blackstone’s university lectures, is a very readable elementary text. Although its scheme of organization is borrowed from an earlier work by Sir Matthew Hale, Analysis of Law, it represents a radical departure from contemporary legal thought, which tended to treat the law as a catalog of unrelated writs and statutes. In Commentaries, Blackstone blended the intellectual traditions of the common law with those of 17th-and 18th-century English political philosophy.

Blackstone had only a vague grasp of systematic conceptions of law, and he was in fact frequently illogical, inconsistent, and uncritical. His purpose, however, was simply to provide literate men with entertaining and persuasive explanations of the existing legal order rather than to construct a critical and consistent jurisprudence. Commentaries performed a service for society and should be regarded more as a handbook for the layman than as a legal treatise.

In his treatment of law Blackstone argued a division between natural and positive (municipal) law by insisting on the existence of a natural law and maintaining that positive law which is not in accord with the principles of natural law is not law at all. But he held that there are few such principles and that most positive law concerns matters on which natural law is silent. Rights and wrongs are objects of law; rights are of persons or things, while wrongs are either public or private. Evidently, he regarded the law of gravitation, the law of England, and the law of nature as examples of the same principle, that is, the imposition of rules by a superior power on its subjects.

Blackstone’s lack of precise terminology and use of loose phraseology result in contradictions. When he borrowed the scholastic definition of positive law, “a right or just ordinance commanding what is right and forbidding what is wrong,” he deliberately struck out “right or just.” Thus it is not clear whether he meant that whatever the law commands is right or that only laws that command what is morally right are really laws. He also reasserted the traditional equation of natural law with common law. Thus he did not directly face up to the problem of whether men only have those rights which the law gives them or whether law is simply the acknowledgment by the state of the natural rights inherent in each individual. According to Blackstone, Englishmen enjoyed only those rights which the common law proclaimed, but in fact Englishmen had created the common law to proclaim their rights.

Tags: Commentaries on the Laws of England, William Blackstone