Crisis of the House Divided: An Interpretation of the Issues in the Lincoln-Douglas Debates 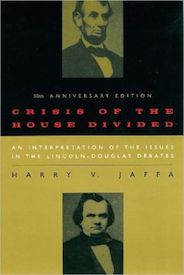 The late Harry Jaffa, in Crisis of the House Divided, presents his readers with two contending schools of American political theory, viewed through the lens of the debates between Stephen Douglas and Abraham Lincoln in the Illinois Senate election of 1858.   A reader seeking a historical narrative of the period will be surprised, and perhaps disappointed.  Jaffa assumes that the reader already has a familiarity with the basic history of the subject; he is interested in much deeper questions related to the nature and legitimacy of the American government.

Jaffa invites us to consider the debate between Douglas and Lincoln not merely as one between pro- and anti- slavery politicians, nor as a discussion between two anti-slavery politicians as to the best means of limiting the spread of slavery, but rather as a fundamental disagreement on the founding principles of the American government. Jaffa poses three questions of Douglas and Lincoln.  Firstly–what is the relation, if any, between the Constitution and the Declaration of Independence?  Second–how do the two bear upon the legitimate objects of government?  Finally, one reaches the crux of the issue–what are the moral considerations of goodness and justice in the conduct of government?  This last question is the central issue of classical political philosophy, and Jaffa, following the teaching of Leo Strauss, regards it as pivotal to comprehension of the ultimate issues at stake between Lincoln and Douglas.

Jaffa pursues these questions by closely analyzing first Douglas’s position and then Lincoln’s.  The debates of 1858, it will be recalled, focused on the issue of the spread of slavery in the territories, to the exclusion of everything else.  While it may seem an unusually technical and esoteric question to modern readers, compared to say, the morality of slavery itself or the desirability for its abolition, Jaffa demonstrates how the issue, though narrow, could be viewed by all sides as representative of the greater questions posited above.

Jaffa begins with a lengthy exposition of Douglas’s political and legal philosophy.  For Douglas, the Constitution was the centerpiece of the American nation.  The promises of equality and liberty found in the Declaration were less relevant.  Rather, what was crucial was a scrupulous adherence to its terms and the laws created under it by the citizens;  only maintenance of the principles of constitutional government could prevent chaos. 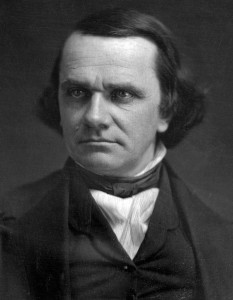 This view, of course, had the great political advantage of enabling Douglas to appear as all things to almost all people.  Radical abolitionists would, of course, have no use for a constitutional structure which tolerated slavery, and they were quite prepared to divide the Republic rather than to live with an immoral structure.  This group of voters, however, was not Douglas’ target audience.  Southern slave-owners could be reassured by the fact that Douglas was in no way proposing to upset the constitutional balance of power that had evolved over time, and would work to keep radical ideas at bay in an effort to maintain the status quo.  More moderate Northerners, who might be opposed to slavery, but were by no means focused on the issue could be enticed by Douglas’s arguments on popular sovereignty.

Essentially, Douglas argued that law could only follow conventional morality in a government that depended to any extent upon the will of the people.  Slavery, which depended upon the active support of the legal system to survive, could not long last in a place where juries were made up of people opposed to slavery and local executive, legislative, and judicial officials depended upon the same individuals for their elections.  Since that was true of states, reasoned Douglas, the constitutional and simple solution to fix the slavery issue was to extend the same prerogative to those citizens living in territories not yet made into states.  Slavery might or might not wither and die, but the situation would get no worse, and recourse to the unending sword would be avoided.

Equivocal solutions to grave difficulties and immoral situations had a certain attraction, then as now.  But, of course, the whole structure Douglas offered was fraught with weakness.  Abolitionists decried its fundamental immorality.  Southern slave-holders, though protected, remained highly suspicious that some clever dodge was being perpetrated. Suspicions hardened on both sides when Douglas placed himself in opposition to the admission of Kansas as a slave state under the Lecompton Constitution in 1857.  For Douglas, however, this opposition was based entirely on the idea of popular will being expressed.  Douglas did not care whether any particular group of voters elected to create a free state or slave state, or a free or slave territory.  But logical consistency demanded that he insist on those voters having a free and fair vote, which was certainly not what had happened in Kansas after the Lecompton constitution was offered to the electorate.  Thus, by positioning himself in favor of electoral integrity, Douglas was able to position himself as an anti-slavery leader.  This positioning, Jaffa argues, was a tempting mirage, to many anti-slavery leaders, including the mercurial Horace Greeley, who argued that Douglas should be preferred to Lincoln at the election. 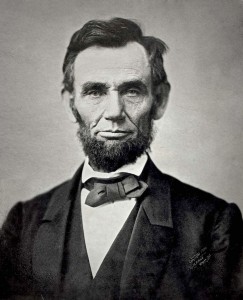 At the same time, Lincoln went on to argue the imperative of liberty.  For Lincoln, the central promise of American existence was not the Constitution, but the statement in the Declaration of Independence, “that all men are created equal.”  Every act and event that followed, whether the Constitution itself or the acts of the United States government, drew legitimation from that promise.  For Lincoln, slavery was a violation of that promise. While it might be an unavoidable evil, something that citizens were forced to endure in those states where it already existed, the imperative of liberty demanded that it not be allowed to spread further.  The idea that it could spread into the territories by affirmative act of Congress, or by popular will, was bad enough.  The idea that it could spread backwards into the free states by operation of decisions of the Supreme Court, mainly the Dred Scott decision, was anathema.

This idea, Jaffa argues, that American government derived its  legitimacy by undertaking to protect the liberties of free men in a free, and moral, society, was central to Lincoln’s entire political philosophy, and his political rhetoric.  Jaffa also contends that Lincoln’s argument places him firmly in a long line of political thinkers, beginning with Socrates and Aristotle, and continuing down to Locke and Madison, who considered the question of liberty, morality, and the legitimate exercise of power.

Jaffa’s view contrasts with more progressive historians and political scientists who often argue that Lincoln was driven mainly by ambition or low political cunning.  This argument is usually accompanied by a dismissal of the danger posed by the spread of slavery or the implications of the Dred Scott decision, either through a (now-outdated) belief that slavery was not economically viable as a going concern over the long term, or through a failure to appreciate the future legal possibilities contained within the decision.  However, Jaffa’s view also challenges some contemporary conservative thinkers, who argue that the Civil War marked a dangerous derangement of the Constitutional system, and a usurpation of state power by the federal government.  Such a view is correct, of course, if one views the Constitution as the most important, or the only important document within the American legal canon  If one accepts Jaffa’s argument, however, the American people become inheritors of the Greek political tradition, the free, self-governing citizens of the (very large) polis.  The Americans, in other words, become not “people who have a written Constitution,” but “people who have declared themselves to be free by the Declaration.”  This shift in viewpoint forces a drastic reappraisal of both American history and American political science.

It goes without saying that stylistically, Jaffa can sometimes be difficult to follow.  He concedes little to his reader either in his prose or in his marshaling of arguments.  However, all in all, Crisis of the House Divided, while complex, is an extremely rewarding work to contend with and one that will well repay extensive study and careful consideration.