Culture of Corruption: Obama and His Team of Tax Cheats, Crooks, and Cronies 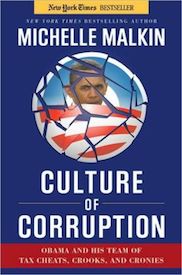 Barack Obama’s approval ratings are at an all-time low. A recent Gallup poll found that half of the Americans polled said Obama did not deserve a second term. Weary of the corruption that gushes from the White House faster than a Gulf Coast oil spill, voters are ready to put a cap on smear campaigns, pay-to-play schemes, recess appointments, and Chicago politics.

In the updated paperback edition of her #1 New York Times bestselling book Culture of Corruption: Obama and His Team of Tax Cheats, Crooks, and Cronies, Michelle Malkin says, “I told you so,” citing a new host of examples of Obama’s broken promises and brass knuckled Chicago way.

Culture of Corruption proves once again this isn’t just any politics. It’s “boodle”-clogged, dissent-squelching, redistributive Chicago politics. The 2010 elections promise to be an anti-corruption referendum for the history books. “After all,” Malkin says “You can’t reform corruptocrats, but you can vote them out.” New revelations in the updated Culture of Corruption:

How Obama has declared war on independent government whistleblowers—with unannounced firings, smear campaigns, and forced silence—when their findings expose his political allies.
How First Lady Michelle Obama’s campaign against childhood obesity is less about reducing our youths’ waistlines and more about swelling SEIU coffers with nearly 400,000 new food service workers.
How, despite the exposure of ACORN’s illegal practices and subsequent defunding, ACORN still remains—and why the Obama White House remains tight-lipped on the future of ACORN.
How Obama is using recess appointments to install politicos when both Democrats and Republicans have torpedoed the nominations.
How the White House is manipulating key races across the country, including endorsing such candidates as Alexi Giannoulias—a mob-linked, scandal-tainted banker from Obama’s hometown.

Powerful, damning, and comprehensive, the paperback edition of Culture of Corruption reveals the ever-growing mountain of sleaze and self-dealing that the Obama administration would rather you not know.