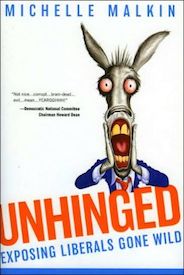 But now Michelle Malkin has done the job for the APA: she exposes just how sick liberals have become, and how they can recover their psychological health, in Unhinged: Exposing Liberals Gone Wild. Like the hideous creature in the movie Alien, gestating in the stomach of a seemingly benign human host, the unhinged liberal feeds off the illusion of normalcy until he can no longer tolerate his artificial confines. This book is a forensic examination of the extraterrestrial creature exploding from the Democrat Party’s gut. Malkin details how crackpot, tinfoil-hat theories — Bush v. Gore was a coup; Iraq was invaded for its oil; the bin Laden family and the Bush family are in cahoots — are now readily accepted at the highest echelons of the Democrat Party and liberal establishment.

Like any good horror movie, the story of today’s Left is scary and silly at the same time. Malkin here provides an unflinching (and uncensored) look at the Left’s foul-mouthed bigots in Hollywood, its pie-throwing lunatics on college campuses, and the fetid swamps of the liberal blogosphere. She fearlessly exposes liberals’ berserk record of attacks on Republican women, people of faith, troops, and veterans. From the grass roots to the top suits, Malkin explains, Democrats have abandoned arguments in favor of ad hominem attacks and conspiracy theories. They now routinely indulge extremism, rampant campaign vandalism, and assassination fantasies. The Left, in short, has gone mad.