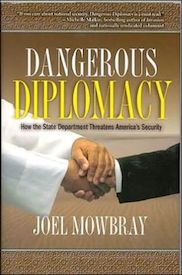 Fighting to send arms to Saddam, resisting post-9/11 attempts to toughen visa requirements, struggling to keep American parents from rescuing their kidnapped kids in foreign countries, doing everything it can to shut down the Iraqi democracy movement — amazingly enough, this is the record of the U.S. State Department, an often out-of-control organization that acts at odds with our nation’s best interests more often than most Americans realize.

Mowbray documents a State Department in dire need of reform — and he has helped make that reform possible by revealing here for the first time just how far State has strayed from its intended role as the primary agent of U.S. interests abroad.

Mowbray has them quaking at State as he exposes:

“Many Americans, including particularly those who have served with pride in the State Department as I have, will read this strong indictment with a heavy heart. But there is too much here to ignore about a bureaucratic culture that has seemingly become dysfunctional in dealing with tyrannies. At the very least a major, objective, outside assessment of this role of the State Department seems in order.” —James Woolsey, former director of Central Intelligence

“What Joel Mowbray uncovers about the State Department is truly shocking. He has performed a unique and invaluable service in shining light on State’s record. Every American should heed the lessons of Dangerous Diplomacy.” —Sean Hannity, Fox News

“Pit-bull journalist Joel Mowbray was the first to reveal how the State Department rolled out the red carpet for the September 11 hijackers. Now, in his explosive first book, he digs deeper to expose State’s corrosive and corrupted culture-a culture that has coddled terrorists, tyrants, and other America-haters. If you care about national security, Dangerous Diplomacy is a must-read.” —Michelle Malkin, bestselling author of Invasion and nationally syndicated columnist