The Design of Life 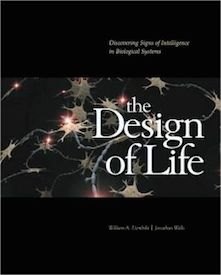 Nearly 20 years ago, a small non-profit in Texas published a textbook called Of Pandas and People — an event that set off a firestorm. The National Center for Science Education (NCSE) condemned the book as full of “half- truths, untruths, and nonsense.” Law review articles tried to prove it unconstitutional. And in 2005, a federal judge banned it outright from science classrooms. Why did Darwinists go to such extremes? Simply because the book offered a potent, comprehensive critique of Darwinian evolution and proposed a legitimate scientific alternative, intelligent design (ID).

Fast forward to 2008 — and Pandas’ successor, “The Design of Life,” written by leading ID theorists William Dembski and Jonathan Wells, brings readers up to speed on the numerous advancements of ID over the past 20 years. The Design of Life is more than twice as long as Pandas, recounting many of the peer-reviewed scientific papers, scientific books, and laboratory studies completed by ID theorists. It offers an excellent up-to-date account of ID for any reader.

For the newcomer to ID, The Design of Life offers clearly written and well-illustrated chapters explicating ID’s basic scientific concepts, such as irreducible complexity and specified complexity. It also gives accessible discussions of more complex issues, such as the “irreducible core.” Many other hot topics in the ID field are covered as well — including:

The book also provides piles of examples where the molecular data has conflicted with expectations of universal common ancestry, and refutes the Darwinist icon that pseudogenes demonstrate that humans share common ancestors with other mammals. In other highlights, Dembski and Wells address SETI?s objections to ID and perform Lasic surgery on the common Darwinist icon that the vertebrate eye exhibits bad design.

With over 100 pages of footnotes and general notes, The Design of Life gives an immense amount of accessible data and scientific arguments supporting the view that “the source of that functional information is a designing intelligence.” But make no mistake: If Darwinists reacted strongly in fear over the scientific arguments in Pandas, they will go supernova after reading The Design of Life.

“Dembski and Wells argue calmly and convincingly that intelligent design theory is empirically testable (in spite of Darwinists’ shrill protests to the contrary) by indicating precisely what it would take to refute the theory, namely a clear demonstration that systems exhibiting irreducible complexity with specified complexity can in fact arise spontaneously by purely material processes. Their discussion takes intelligent design theory far beyond what we were able to accomplish when we wrote Pandas. I salute Dembski and Wells for a most worthy addition to the already powerful case that intelligent design deserves a seat at the academic table in university biology courses and with all scientists working to unlock the mystery of life’s origin.” — Dean Kenyon, Emeritus Professor of Biology, San Franciso State University

“Gives all interested parties in the debate over biological origins the hard scientific evidence they need to assess the true state of Darwin s theory and of the theory of intelligent design. But it does much more: it carefully fosters the attitude of open inquiry that science needs not only to thrive but also to avoid becoming the plaything of special interests.” — William Harris, biologist, University of South Dakota