Guilty as Sin: Uncovering New Evidence of Corruption and How Hillary Clinton and the Democrats Derailed the FBI Investigation 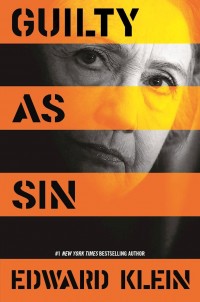 Ed Klein is, by now, an old hand at digging into the sordid pasts and presents of the Clintons, as he ably notes in the final section of his book “A Note On Sources”. One would think that, by now, he has found all that there is to find — and one would be wrong.

When FBI Director James Comey announced that Hillary Clinton wouldn’t be indicted for her mishandling of classified information, the entire country was shocked: how could Hillary get away with this! Immediately, Ed Klein, forever playing the part of investigative journalist, dove into the details. Guilty As Sin, as the title suggests, sets out to prove Hillary Clinton’s guilt — that she did mishandle classified information in a criminal way.

Some readers might be expecting a long, almost lawyeresque book, poring through the details to establish Clinton’s culpability. Klein instead opts to take a third-person narrative approach, illustrating the key moments and days leading up to Comey’s announcement, and the many days afterwards leading up to now.

The book is split into sections, hitting on the personal perspectives of both Clintons, along with Barack Obama and James Comey, before the chapter on the investigation. After the investigation, Klein scores an exclusive interview with Donald Trump on “Trump Force One”, which offers an illuminating look into the Trump campaign.

The truths that Klein promises are, as expected, shocking, suggesting collusion and willful blindness on the part of the FBI in yet another example of the Clinton double standard. From the opening meeting between Loretta Lynch and Bill to the Clintonian bitterness seeping from the final scenes, Guilty As Sin offers two truths: the real secrets of Hillary’s emails and the well-known toxic temperament that has animated her entire political career.

This book hits on enemies foreign and domestic — from foreigners who could blackmail Hillary in office to the stunning fact that Obama would have preferred almost any other Democrat to succeed him. The “Pay To Play” chapter offers all sorts of corrupt corporate connections, from Nigeria to Haiti, from TD Bank to Boeing. The evidence is damning, both in detail and in quantity — Hillary Clinton is more corrupt than your average politician. Her decades of cultivated elite ties have metastasized like a cancer into a network of deals, weakening government offices and spreading more corruption into our government.

The end of the book retells both the media reaction to Comey’s investigation and the ongoing 2016 presidential campaign, before ending in a case for Trump. The entire book built up a solid case against Hillary, touching on her temperament, her corrupt foreign dealings, and of course her criminal private email server. It had proven why Hillary was Guilty As Sin.

The epilogue, however, also brought in Donald Trump. The Trump chapters had already highlighted his campaign’s perspective, and some of his appeal, but the epilogue really ties the book together. Klein doesn’t merely settle for proving Hillary’s unworthiness — he sets out to prove exactly why Donald Trump should be President of the United States.