Unlikeable: The Problem With Hillary 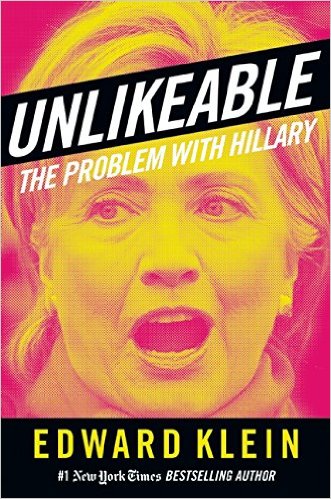 In the run up to the 2008 election, Hillary Clinton was presented to the world as the inevitable successor to George W. Bush.  The public was exhausted by Bush and sick of the wars in Iraq and Afghanistan.   At first, they bought into the idea of Hillary, but when they started seeing her and hearing from her they asked for something new.  More than eighteen consecutive years of Bushes and Clintons seemed far more than enough.

Barack Obama realized he might be able to beat her and won the hearts and minds of the Democrat Left and the American public with his motto of “Hope and Change”.  Her nomination by divine right went off the rails and Obama took the nomination.

Ed Klein first wrote about Hillary in his 2005 book “The Truth About Hillary”.  Her loss to Obama is recounted in Klein’s 2012 book “The Amateur”.  The unrelenting conflict between the Clintons and the Obamas is told in 2014’s “Blood Feud”.   Klein tells us how much they despise and distrust each other and how they managed to reach a grudging deal to help Obama keep the White House in 2012.

The title of the book refers to the fact that the public seems to like the idea of Hillary a lot more than they like their direct experience of her.  Except for partisan conservatives the public seems to love Bill Clinton to death and will forgive him almost anything.  Hillary benefits from that glow to a point.  But her support is mostly among the Clinton partisans and is much narrower than Bill’s.

When Hillary supporters are asked to start listing her actual accomplishments they are hard pressed to name anything of substance.  When this is asked on air one seems to hear the music of a game show waiting for a stumped contestant to answer.  In fact, the author notes that Hillary’s entire “experience” can be listed in a single Tweet: “HillaryCare, Monica Cover-up, Iraq war vote, bungled 2008 campaign, Russian reset, Benghazi, deleted e-mails, selling favors at State.”  Does this add up to becoming President?

Through the several relaunches of her campaign, she has yet to connect to the American public.  Bill had her take likeability lessons, which she hated and broke off.  Her campaign announced a silly initiative that Hillary would henceforth become more spontaneous and authentic.  She said she was going to focus less on mass rallies after Bernie Sanders started drawing bigger crowds.  Instead, she was going to meet with a few local voters in various locales and hear their legitimate concerns.  However, this was exposed as bussed in Clinton operatives with canned questions, as a staged photo-op for the campaign press.  She also caught the ire of those covering her when she marched down a street with them kept back behind a moving rope corral.

With Warren and Biden deciding not to run and Bernie Sanders the only Democrat alternative, Hillary is almost certainly going to get the nomination of the Democrat Party.  We will see in November 2016 if Hillary can unlock the key to being likeable or if they turn away and hand the keys to the White House to someone else.
Original CBC Review by Craig Matteson