Lessons My Father Taught Me: The Strength, Integrity, and Faith of Ronald Reagan 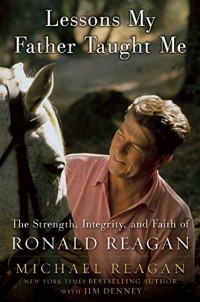 New York Times Bestselling author Michael Reagan is the adopted son of Ronald Reagan and Jane Wyman. In this book, Michael Reagan reveals what it was like growing up as a child to one of the most famous Hollywood stars who went on to become a great American president and one of the greatest leaders of the 20th Century.

Through personal anecdotes of Ronald Reagan in his most unguarded moments, he also discusses surviving divorce and living in a blended family. The advice spans lessons on: Faith, Leadership, Integrity, Humility, Self-Reliance, Generosity, Forgiveness, Dealing with Defeat, and Grace under Pressure, and Victory.

The book provides colorful inside stories of growing up with the Hollywood Elite, and a behind-the-scenes looks at the inner workings of Washington and Cold War politics. the book will appeal to fans of Ronald Reagan and anyone looking to improve their own leadership capabilities, both in their personal lives and at work, by following the life examples from a proven and admired leader, Ronald Reagan.