Letters to a Young Conservative (Art of Mentoring) 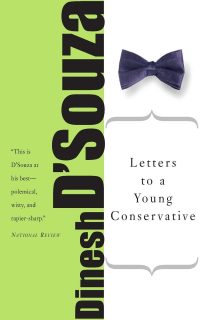 Who better than Dinesh D’Souza to write Letters to a Young Conservative, the latest volume in Basic Books’s “Art of Mentoring” series? After all, D’Souza’s name and the image of a young, brash conservative movement have gone hand-in-hand for more than a decade.

Consider his career: it was D’Souza who coined, or at least exhumed, the term “politically correct” to define modern left-liberal orthodoxy; D’Souza who cut his teeth as editor of the delightfully irreverent Dartmouth Review in the 1980s, and then served as Reagan’s domestic policy adviser; and D’Souza who, when barely into his thirties, produced two best-selling books, Illiberal Education and The End of Racism, that were bracing tonics for the conservative mind, young and old. Even now, pushing 40 (Dinesh D’Souza, 40?), his face is still boyish, his public manner still smartly polemical, and his overall image still that of the right-wing young Turk, the enfant terrible of the culture wars. Even as a senior citizen, one imagines, he will still be thought of as the prototypical “young conservative.”

In a word, everything. D’Souza writes his fictional correspondent 31 letters, each one brief, as is the book, and each one tackling a new topic, from statist excesses (“Why Government is the Problem”) and libertarian delusions (“The Libertarian Temptation”), to the follies of academia (“Why Professors are so Left Wing”) and the evils of race-based discrimination (“Why Affirmative Action Hurts Blacks”). At a breakneck pace, the book gallops through gun control and multiculturalism, eco-silliness and abortion, ending with a brief “conservative reading list” and an exhortation to be “cheerful.”

There are advantages to this format—D’Souza covers plenty of ground, and gives “Chris” a wide-ranging account of his own philosophy. He begins with the basics: “Being a conservative in America,” he writes, “means conserving the principles of the American Revolution.” In his reading of the American experiment, conservatism is best understood as a blend of classical liberalism and ancient virtue—”the belief that there are moral standards in the universe and that living up to them is the best way to have a full and happy life.” Recognizing the “warped timber of humanity,” conservatism stands opposed to the modern liberal belief that “human nature is intrinsically good,” and thus that “the great conflicts in the world…arise out of terrible misunderstandings that can be corrected through ongoing conversation and through the mediation of the United Nations.”

From this intelligent (and safely mainstream) definition of conservatism, D’Souza makes his way through the American political landscape, applying his principles to one issue after another—and, for “Chris’s” sake, paying special attention to the nonsense that afflicts our colleges and universities. No one steeped in conservative politics will be particularly surprised by his conclusions: that “although the welfare state has lost some of its legitimacy, the federal government is still too large and overbearing,” that racial preferences “devalue black achievements, and they intensify doubts about black capacity,” or that “the feminist error was to embrace the value of the workplace as greater than the value of the home.” Nor will they be surprised by his targets—campus sacred cows like Rigoberta Menchu, the liberal bias of the mass media—or by his heroes, men like Ronald Reagan and Abraham Lincoln.

Indeed, the lack of surprises proves to be the book’s greatest weakness. D’Souza has written a volume ideal for the true political neophyte, but the political neophyte at any elite university is unlikely to be receptive to conservative ideas of any kind. The suffocating liberalism of modern college life is so strong that any conservative unlucky enough to arrive without a sturdy intellectual base for his convictions will be almost inevitably yanked leftward within a year—or less. This means, in turn, that the few right-thinking men and women at colleges like the one that “Chris” supposedly attends must be already well-informed, well-read, and well-grounded in conservative ideas.

Having recently emerged from four years at one of America’s most famous—and famously liberal—colleges, I can promise D’Souza that the young conservative doesn’t need to be told, yet again, why affirmative action is wrong or why big government is bad for America. He needs to be told how to communicate these ideas to an utterly unreceptive liberal campus, where antipathy toward conservatives is less a political position than a cultural prejudice. He needs to overcome not well-reasoned political arguments but sneers and japes and rolling eyeballs.

I can still hear the voices, echoing in dorm rooms and dining halls, and spilling unthinkingly through ivy-hung courtyards and musty classrooms: Oh, the Christian Right is so scary…George Bush is so stupid…they’re all redneck gun nuts and religious fanatics…John Ashcroft is such a fascist…. And above all, delivered in a vaguely scandalized tone—you’re not, like, a Republican, are you?

This isn’t simply a war of ideas—it’s a war of attitudes, in which conservative-bashing is the last acceptable form of bigotry. It is here that D’Souza’s Letters fails the young conservative, by offering “Chris” a comprehensive policy briefing—the literary equivalent of forcing an eager child to eat his peas, and broccoli, and cauliflower, without any promise of dessert. The fare is nutritious, sure, but it lacks panache—and panache, which served the young(er) D’Souza so well 20 years ago, is exactly what the young conservative needs to break through the suffocating condescension of his liberal peers.

It’s a shame, because early on there are hints of a better, more exciting model being tried out, and then discarded. The beginning of the Letters is devoted to D’Souza’s own college years, and it offers a brief and hilarious sketch of life at the Dartmouth Review. The Review, of course, was a major organ of the young, Reagan-sparked revival that produced much of the modern conservative intelligentsia, and D’Souza was present at the creation. In stinging prose that recalls his own Illiberal Education, he relates the various exploits that earned the Review national fame. This chapter is a treat for those who have never read how a Review reporter was nearly expelled for “vexatious oral exchange” with a professor; how Dartmouth conservatives founded a Bestiality Society to protest the funding of campus gay groups; or how the Review tape-recorded, and then printed, the racist ramblings of a wacky left-wing prof, leading first to a libel suit and then to his resignation. “The last I heard,” D’Souza remarks, “he had opened a drum store somewhere in Vermont.”

But then D’Souza leaves Dartmouth behind, and the book never quite recovers. The exciting tales of young conservatives tilting at windmills give way to dryer, more pedantic fare, in which the author’s ideas are seldom wrong, but rarely exciting or novel.

This is a great mistake, since tales of right-wing derring-do—reactionary chic, even—are just what is needed to cheer the heart of today’s young conservative. After all, we’re already right. What we need, and what D’Souza ultimately fails to provide, is an up-to-the-minute lesson in how to be cool. It hardly seems fair to ask of the eternally young Dinesh, but what might be most invigorating to this and coming generations of college conservatives is a Memoirs of My Revolutionary Youth.

Book Review from The Claremont Review of Books, by Ross Douthat