Meltdown: A Free Market Look at Why the Stock Market Collapsed, the Economy Tanked, and Government Bailouts Will Make Things Worse 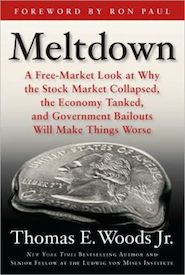 Since the fall of 2008 — as the stock market plummeted, companies folded, and millions were put out of work — Americans have been bombarded with a relentless refrain: the free market economy has failed. The remedy? According to Barack Obama, the late Bush Administration, Democrats and Republicans in Congress, and the mainstream media, it’s more regulation, more government intervention, and more spending.

But now, in Meltdown: A Free Market Look at Why the Stock Market Collapsed, the Economy Tanked, and Government Bailouts Will Make Things Worse, bestselling author Thomas E. Woods Jr. demonstrates that the current crisis was caused not by the free market but by the government’s intervention in the market — and that further intervention in the form of trillion-dollar bailouts and “stimulus packages” will only deepen and prolong the pain. Woods, a senior fellow at the Ludwig von Mises Institute and winner of the 2006 Templeton Enterprise Award, begins by identifying the immediate causes of the subprime mortgage meltdown that precipitated the crisis. Why were banks so willing — and able — to lend so much money even to applicants who lacked jobs, income, and down payment money? All the major culprits — including Fannie Mae and Freddie Mac, the Community Reinvestment Act, and our “pro-ownership” tax code — had one thing in common: they were tools or creatures of the federal government.

But Meltdown goes deeper, tracing this most recent boom-and-bust cycle — and all such booms and busts of the past century — to one of the most revered government institutions of all: the Federal Reserve System, which allows busy-body bureaucrats to pull the strings on our financial sectors and the value of the very money we use. Indeed, Woods shows, the Federal Reserve’s policy of intervening in the economy to push interest rates lower than the market would have set them was the single greatest contributor to the crisis that continues to unfold before us. Meltdown also provides a timely history lesson to counter the current call for a new New Deal. The Great Depression, Woods points out, was only as deep and as long as it was because of the government interventions by Herbert Hoover (no free-market capitalist, despite what your high school history teacher may have taught you) and Franklin D. Roosevelt (no savior of the American economy, despite what the mainstream media today tells you).

“We can probably expect an avalanche of books in the coming months that purport to tell us what happened to the economy and what we should do about it. They’ll be dead wrong, and most of the advice they provide will be dreadful. You can count on that. That’s why Meltdown is so important. This book actually gets things right. It correctly identifies our problems, their causes, and what we should do about them. It treats the architects of this debacle not with the undeserved reverence they receive in Washington and on television, but with the critical eye that is so conspicuously missing from our supposedly independent thinkers in academia and the media. Tom Woods reserves his admiration for those few who, unlike the quacks who would instruct us now, actually saw the crisis coming, have a theory to explain it, and can show us the way out. . .Ideas still matter, and sound economic education has rarely been as urgently necessary as it is today. There is no better book to read on the present crisis than this one.” ? CONGRESSMAN RON PAUL (R-TX)