The Politically Incorrect Guide to the Civil War 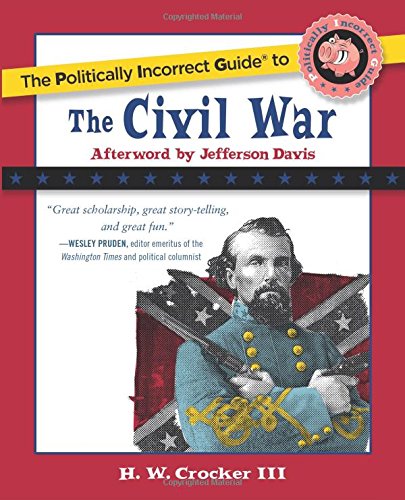 In The Politically Incorrect Guide to the Civil War, Crocker profiles eminent–and colorful–military generals including the noble Lee, the controversial Sherman, the indefatigable Grant, the legendary Stonewall Jackson, and the notorious Nathan Bedford Forrest. He also includes thought-provoking chapters such as “The Civil War in Sixteen Battles You Should Know” and the most devastatingly politically incorrect chapter of all, “What If the South Had Won?”

Along the way, he reveals a huge number of little-known truths, including why Robert E. Lee had a higher regard for African Americans than Lincoln did; how, if there had been no Civil War, the South would have abolished slavery peaceably (as every other country in the Western Hemisphere did in the nineteenth century); and how the Confederate States of America might have helped the Allies win World War I sooner.

Bet your history professor never told you:
* Leading Northern generals–like McClellan and Sherman–hated abolitionists
* Bombing people “back to the Stone Age” got its start with the Federal siege of Vicksburg
* General Sherman professed not to know which was “the greater evil”: slavery or democracy
* Stonewall Jackson founded a Sunday school for slaves where he taught them how to read
* General James Longstreet fought the Battle of Sharpsburg in his carpet slippers

This is the Politically Incorrect Guide that every Civil War buff and Southern partisan–and everyone who is tired of liberal self-hatred that vilifies America’s greatest heroes–must have on his bookshelf.