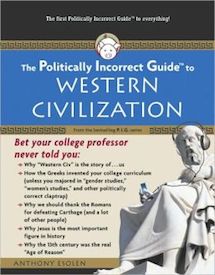 Western Civilization is the envy of the globe. It has given to the world universally accepted understandings of human rights (rooted in the Judeo-Christian notion of the dignity of every person as made in the image of God) . . .created standards for art, music and literature that have only rarely been equaled or surpassed outside the West . . .and has originated political and social systems that have spread all across the planet.

If people today inside and outside of the West were aware of these things, “The Politically Incorrect Guide™ to Western Civilization” would not be needed. But an enveloping fog of political correctness now obscures these and other truths about the greatness of the West. Leftists and Islamic jihadists find common cause in assailing Western “colonialism,” “imperialism,” and “racism” as the cause of the conflict between the Islamic world and the West, and guilt and self-reproach paralyze Western leaders and public figures — who speak of their own cultural patrimony in disparaging terms they would never dare to use about a non-Western culture. And in the academy today, small men and women, gabbling in a jargon incomprehensible even to themselves, flatter students into believing they have nothing really to learn from Sophocles or Shakespeare. The great poets are compelled to become one of us (Shakespeare is secretly subverting the Christian faith), or they suffer our scorn and condescension (Shakespeare is a patriarch but didn’t know any better).

But now, Anthony Esolen — conservative, Christian, highly regarded translator of Dante, professor of English at Providence College, and one of the team-teachers of that school’s esteemed Development of Western Civilization core curriculum — has risen to the West’s defense. “The Politically Incorrect Guide™ to Western Civilization” mounts a fierce counterattack to those who hate the West, taking on the prevailing assumptions that have today made Western Civilization into the universal whipping boy for all of today’s global problems. In a series of nine vigorous yet breezily entertaining chapters, Esolen introduces you to the significant events, individuals, nations, ideas, and artistic achievements that make Western Civilization the greatest the world has ever known.

Why the West leads all the rest:

Today — with the West imperiled as never before by the global jihad and threats from China and elsewhere — defending the West has become an urgent imperative: if we don’t value what we have and what we have inherited, we will surely lose it. “The Politically Incorrect Guide™ to Western Civilization” is an essential sourcebook for that defense.