The Quest for Community 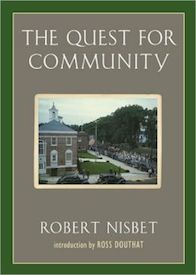 In The Quest for Community, Robert Nisbet argues that the rise of individualism in the West has not come without negative consequences. He claims that individualism has contributed to the decline of the social influences which create community, including family, neighborhoods, volunteerism, and the church. As a result, people have replaced their social connections with a strong, centralized government. Perhaps unwittingly, this transition has led to the rise in statism and totalitarianism around the world.

Considered his magnum opus, The Quest for Community places Nisbet’s insightful assessment of the West in a class of its own. At the time of writing, the world was recovering from World War II. They had just witnessed the effects of what Nisbet believes was the influence of modernism, which claimed that progress and knowledge would usher in a new age of enlightenment. The effects of two world wars in the first half of the 20th century led many to abandon the promise of modernism and look for answers elsewhere. It is in this intellectual soil that Nisbet reevaluates complete trust in the merits of individualism; rightly championed by many of our social institutions for its insistence on personal responsibility, individualism without social associations can have a deleterious effect on culture and a free society.

Nisbet’s embrace of conservatism can be described as a bit of a journey. Educated at Berkeley and once a professor of sociology at Columbia University, he experienced a Reagan style conversion to conservatism later in life. He went on to write for National Review and become a scholar at the American Enterprise Institute. Though Nisbet was considered liberal at the time of this writing, The Quest for Community has remained in the canon of conservative thought as a result of his critique of big government and his defense of the social institutions championed by the Right. New York Times columnist Ross Douthat has gone as far to say that this book is “arguably the 20th century’s most important work of conservative sociology.”

As a rigorously independent thinker, Nisbet’s strand of thought is difficult to pigeonhole, and he communicated political critique that was often distilled of the ebb and flow of political trends. His independent streak was as strong as his tendency to critique various and sundry social groups. Writing in the introduction to latest edition, Douthat explains that “His occasional sallies had a plague-on-every-house quality—now criticizing libertarians, now attacking foreign-policy hawks, now griping about religious conservatives.”

Today, many people believe that conservatism is at a crossroads. With the changing attitudes among millennials about social issues, the drastic changes in the ways people communicate and share information, and the needs of the aging Baby Boomer generation, attitudes and beliefs within conservatism are becoming wider and more segmented. A fresh look at the foundational underpinnings of conservatism will uncover not only our need for community, but also the challenge we face of creating social bonds while free from the coercion of a centralized government.

This timeless classic is as relevant today as it was when it was written, offering a clear-minded critique of culture that challenges the reader to consider the how free people foster community in a free nation.