Rescuing Sprite: A Dog Lover’s Story of Joy and Anguish 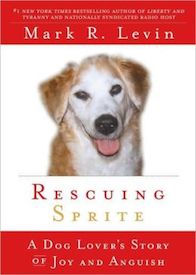 Mark Levin is best known as conservative talk-show host and the bestselling author of “Men in Black: How the Supreme Court is Destroying America.” But he is also a dog lover — and in “Rescuing Sprite: A Dog Lover’s Story of Joy and Anguish,” Levin tells the joyful and painful story of a dog, Sprite, who was adopted from an animal shelter, became a loving and happy member of the Levin family, and then succumbed to illness and had to be put down. A surprise New York Times bestseller, it is a deeply moving story that has touched countless people.

Levin recounts how in 1998, he and his family welcomed a half-Border Collie/half-Cocker Spaniel they named Pepsi into their lives. Six years later, his wife and son persuaded him to adopt a dog from the local shelter, a Spaniel mix. It turned out he was older than originally thought, and he was the most beautiful dog they’d ever seen. They named him Sprite. Their lives would never be the same.

Sprite and Pepsi became fast friends — and the Levin family fell in love with Sprite. But shortly after joining their family, Sprite suddenly collapsed and was rushed to the animal hospital. It was the first of many such visits, and the start of a long journey for the Levin family, filled with much joy and anguish. Between Thanksgiving and Christmas 2006, the Levin family said their emotional final goodbye. Crushed and consumed with grief, Mark turned to family, friends, and fans for help. But new hope came when the Levins least expected it.