Righteous Indignation: Excuse Me While I Save the World! 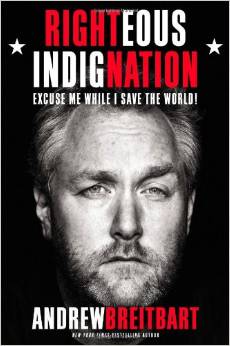 Andrew Breitbart is a rebel with a conservative cause. He grew up in the Hollywood atmosphere, was raised in a household of the conventional Hollywood mindset, used his pop-culture smarts to undercut much of the pop culture’s political message, deployed “60 Minutes” gotcha tactics to expose the mainstream media’s liberal heroes (see ACORN sting video) and proudly thumbs his nose at leftist establishment operatives as he catches them on one tripwire after another.

Defying “the script,” Mr. Breitbart rebelled, not on the left, as ’60s convention would dictate. He missed all that, having been born in 1969. Left-wing Hollywood’s mischievous but self-disciplined problem child has rebelled on the right.

Some of his book reads like a confessional – occasionally offering more personal detail than some readers would care to learn. But it does inform us about what makes one ubiquitous crusader tick.

“Growing up in Hollywood, going to school there, where my administrators invited [’60s radical] Tom Hayden to come speak without the slightest concern that many in the country considered him a traitor for legitimate reasons – I knew these people. They were my friends’ parents, who voted for Hayden [a state legislator] even though they owned million-dollar houses,” the writer informs us.

The author’s cynicism – already hitting on all cylinders – became all the more muscular when he watched in outraged fascination as President Clinton used illegal means to cover up high-level criminality. And that doesn’t include the credible allegation concerning the rape of Anita Broderick, which is not even mentioned in the book.

Right smack in the middle of this volume is where Mr. Breitbart’s narrative takes off like a rocket. The chapter “Breakthrough” is in and of itself well worth the price of “Righteous Indignation.”

He cites the early-20th-century so-called “progressive” era of Theodore Roosevelt and Woodrow Wilson that set the stage for the more aggressive attacks on American ideals in the ensuing decades. T.R., in fact, gave a perfect summation of the mindset when he declared that Progressives were wedded to “no particular kind of machinery, save solely as a means to the end desired.”

“Progressivism,” Mr. Breitbart tells us, “was a strain in American thought that merged Hegel with Marxism and Rousseau,” basically a “soft Marxism without the class struggle.” For pinpoint accuracy, it might have been better to pronounce progressivism as a less-fangs-bearing strain of Marxism, but that examples of class envy are found in rhetoric of both Wilson and the first President Roosevelt.

Mr. Breitbart fingers the people who later would aid and abet the importation of cultural and political poison to our shores. He “names names” of those in this drama who arguably were serious threats to the nation’s security.

The chapter’s 21 pages track an in-depth research on the influence of such intellectual rogues as Herbert Marcuse, Theodor W. Adorno, Wilhelm Reich and their ilk.

The “Breakthrough” chapter is at its best when it traces the transfer to the United States of the German-hatched Frankfurt School, or the Institute for Social Research (ISR) funded by Felix Weil, a young radical from Frankfurt, Germany, who used money from his rich grandfather while preaching the downfall of the capitalist system.

The Frankfurt School “was really a precursor to John Podesta’s Center for American Progress, funded by the Hungarian-born George Soros.”

The Frankfurt School, from its new American home at Columbia University, soon repaid America’s hospitality by unleashing “critical theory” among the populace. That term was coined by Frankfurt School philosopher Max Horkheimer. Mr. Breitbart describes it as encompassing the idea of “criticizing everyone and everything everywhere,” or making “society totally unworkable by making everything basically meaningless.”

This book further informs us that the late, famous broadcaster Edward R. Murrow “helped ship in many of the Frankfurt School’s greatest minds.”

“They walked right into our cultural institutions,” according to Mr. Breitbart, “and [when they] advanced their leadership, their language, their lexicon,” too many ignored them. That is the most dangerous thing you can do with “a driven leftist intellectual clique.”

The author has been threatened with a lawsuit from Shirley Sherrod, the black woman who accused him of taking her words out of context when she spoke of contemplating not helping a white farmer who came to her for help. Mr. Breitbart writes there’s a “hell of a lot more” to that story and to “stay tuned.”

Conservative activists also will find in this book a 13-point primer of do’s and don’ts. The left started this 100-year-old fight. Mr. Breitbart says it’s long past time to fight back.

Book Review from The Washington Times, by Wes Vernon

Tags: Andrew Breitbart, Righteous Indignation: Excuse Me While I Save the World!