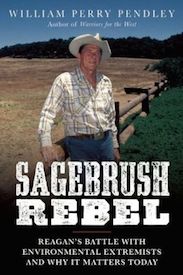 The fascinating story of how Ronald Reagan, self-proclaimed “sagebrush rebel,” took his revolutionary energy policies to Washington and revitalized the American economy.

Governor Reagan, with his unbridled faith in American ingenuity, creativity, and know-how and his confidence in the free-enterprise system, believed the United States would “transcend” the Soviet Union. To do so, however, President Reagan had to revive and revitalize an American economy reeling from a double-digit trifecta (unemployment, inflation, and interest rates), and he knew the economy could not grow without reliable sources of energy that America had in abundance.

The environmental movement was in its ascendancy and had persuaded Congress to enact a series of well-intentioned laws that posed threats of great mischief in the hands of covetous bureaucrats, radical groups, and activist judges. A conservationist and an environmentalist, Ronald Reagan believed in being a good steward. More than anything else, however, he believed in people; specifically, for him, people were part of the ecology as well. That was where the split developed.

William Perry Pendley, a former member of the Reagan administration and author of some of Reagan’s most sensible energy and environmental policies, tells the gripping story of how Reagan fought the new wave of anti-human environmentalists and managed to enact laws that protected nature while promoting the prosperity and freedom of man—saving the American economy in the process.