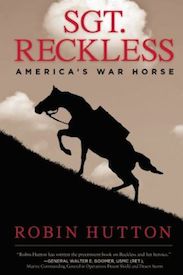 Animals have been used in war for thousands of years, but few U.S. military animals attained the notoriety of Reckless, a sorrel mare small for her size that joined the Marines during the Korean War, and attained the rank of Staff Sergeant. Employed to help move heavy recoilless rifles and ammunition across steep and treacherous terrain, Reckless proved a quick learner, knowing when to take cover and when to proceed.

Her true value and dedication was made apparent in the field, where she proved she could do the work of 10 marines. Reckless regularly proved her bravery and endurance, making precarious trips hauling ammunition to soldiers in need, often during heavy fire. Once home, news of her promotion to Staff Sergeant quickly spread, though that notoriety has since faded. Author Hutton aims to correct that, having spent over eight years researching the remarkable story of Reckless and gathering many of the photos shared here; stories of fellow soldiers litter the book, backing up claims of her bravery and playful personality (not to mention her love of food and beer).

Hutton’s passion and admiration for her subject (she also heads an effort to create a monument to Reckless) shines through in this sparkling and engaging portrait of a most remarkable and courageous animal.