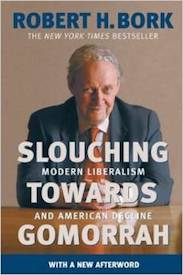 Robert Bork’s “Slouching Towards Gomorrah” thoroughly chronicles how modern liberalism has corrupted American culture and set the country on the road to moral chaos. In the 1960s the Left developed its two main tenets: radical individualism and radical egalitarianism. The first describes the decreasing limits individuals place on personal gratification, and the second refers to the growing emphasis on equality of outcomes rather than opportunity. Together they have formed the new religion of the Left.

It is logically impossible to be both a radical individualist and a radical egalitarian. In trying to do so, the Left has become what Harold Rosenberg termed the herd of individual minds. It recommends a leveling of income not out of genuine compassion for the poor, but an aversion for the successful. As Bork observes, liberals are driven not by what they lack, but what others have. Their strategy has been to vilify the rich, in an attempt to stop anyone from attaining such status. It is, after all, easier to arrive at the Left’s utopia by preventing success than by engaging in mass redistribution of wealth.

Likewise, as Bork notes, liberals are opposed to any real achievement in academia. Self-esteem overrides learning not only in the Ivory Tower, but in elementary and secondary education as well. Learning also succumbs to politics as universities disparage Western civilization, and academic bankruptcy and political correctness plague their curricula, perpetuating facets of liberal ideology such as radical feminism and Afrocentrism, not to mention blatant historical inaccuracies like the myth of the robber barons.

Such revisionism comes without remorse. The Left, having renounced any claims to objective truths, embraces moral relativism and eschews institutions that once defined moral constraints on liberty, including religion, family, and community. Consequently, it ignores fact for political expediency—in this case, that laws indeed impose a morality and that a public morality is both unavoidable and necessary.

Liberalism, asserts Bork, is incompatible with true democracy because it seeks to concoct conditions that no individual would actually desire. In fact, the radical egalitarian element of liberalism is necessarily statist because it cannot be implemented and enforced by any entity other than the government. Bork cites Alexis de Toqueville’s observation that Americans are more obsessed with equality than freedom, and notes that this misguided prioritization did not pose a threat to liberty until the twentieth century. Liberals now view inequality of income as one of the most pressing issues that need attention and rectification—by politicians, of course.

Bork does an excellent job relaying the components of America’s cultural demise. He lacks solutions, however, and many of those he does offer are dubious, such as his proposal for a constitutional amendment allowing Congress to override state and federal court decisions. More disappointing is his unadulterated pessimism about America’s cultural future. He dismisses the popular conservative theory that because modern liberalism is predicated on intellectual dishonesty and moral nihilism it will fail on its own. Instead he proposes that only an unlikely optimism of the will can divert America from the highway to Gomorrah. Judge Bork gives liberalism too much credit.

Book Review from The Freeman, by Jessica Schupak