We Still Hold These Truths 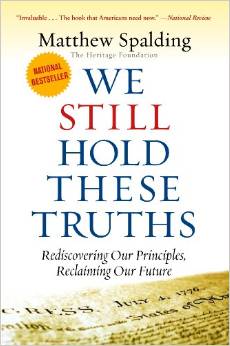 For many today, the American Revolution was primarily a mil­itary campaign. But the “real American Revolution,” John Adams insisted, “was in the minds and hearts of the people,” transforming their “principles, opinions, sentiments, and af­fections.” According to Alexander Hamil­ton, America was to be the experiment that revealed “whether societies of men are really capable or not of establishing good government from reflection and choice, or whether they are forever destined to depend for their political constitutions on accident and force.”

Perhaps this is why Benjamin Franklin, when asked what type of government the Founders had created, quipped in reply: “A republic, if you can keep it.” Helping to keep our republic by reclaiming the Founders’ wisdom is the goal Matthew Spalding has set for himself in this new book. The director of the Center for Ameri­can Studies at the Heritage Foundation, Spalding holds a doctorate in political philosophy and American government from Claremont Graduate University, and, ac­cordingly, his narrative is straight from the West Coast Straussian history book: The American Founders overcame the peren­nial problems of political life by becoming the first to establish government on true principles of political liberty; Abraham Lincoln completed their work by bringing these principles to their logical conclusions; but the Progressive Movement sought to replace these principles with relativism and historicism, and our constitutional government with the administrative state.

Spalding presents a clear, concise, and largely accurate picture of the philosophy that inspired the drafting of the Declaration of Independence and the Constitution. In doing so, he resists the urge to paint the Founders into any particular ideological box: They read their history and political philosophy, but were constantly updating in light of experience with colonial government; they believed what the Bible taught, but also thought man could know political truth by reflection on the laws of nature; they studied Aristotle and Cicero, but also Locke, Montesquieu, Coke, and Blackstone.

At the heart of the Founding, Spalding argues, is the profound truth that, as Thomas Jefferson wrote, the “mass of mankind has not been born with saddles on their backs, nor a favored few booted and spurred, ready to ride them legitimately, by the grace of God.” Thus, though unequal in other ways, all are created equal in their basic capacities for ordered liberty, for self-directed action in accordance with morality. As a result, divine-right monarchies and birthright aristocracies must go; legitimate government derives its just powers from the consent of the governed. It is grounded not in custom or convention but on the firm foundation of universal principle: natural rights that man possesses in virtue of the laws of nature and nature’s God. Being natural, man’s rights are not gifts from the state, the church, or noble landed gentry. Rather, they precede the state, which exists to protect them. Insofar as it fails to do so, the people may abolish one government and form another.

The argument of the preceding paragraph is Locke’s Second Treatise in a nutshell. It’s also Jefferson’s summary of the American mind as expressed in the Declaration. The key insight, Spalding argues, is that the state is subservient to the people, not vice versa. It is inherently limited by man’s natural rights to (for in­stance) life, liberty, and private property. For Spalding, the most important are rights to religious and economic liberty.

Throughout history, attempts to reconcile politics and religion have often failed, resulting in a fusion of throne and altar or a subjugation of one to the other. America was to avoid all of this. Political decisions about the common good were to be an­swered within a Judeo-Christian worldview, without doubt, but issues of church governance and worship were seen as matters of individual conscience, not political relevance. While establishing a formal independence of the institutions of church and state, the nation would not be hostile to religious belief and practice. In fact, the Founders saw this independence as a service to religion, and history has vindicated their judgment. Religious life in America thrives precisely because churches are free from government interference and free to compete for souls. Meanwhile, individuals are free to respond as their conscience requires. None of this, Spalding notes, implies “the separation of religion and politics, or the expunging of religion from public life.”

Just as the liberty to act on one’s conscience regarding such ultimate matters is a natural right, so is the liberty to create wealth and have it protected by law. Hence John Adams: “The moment the idea is admitted into society, that property is not as sacred as the laws of God, and that there is not a force of law and public justice to protect it, anarchy and tyranny commence.” The Founders viewed economic liberty both as important in its own right and as a precondition of other liberties: If man was at liberty to secure a home, land, food, and leisure activities, Spalding argues, “he could be independent, and so he could be free.” Spalding continues: “The essence of liberty is the freedom to develop one’s talents, pursue opportunity, and generally take responsibility for one’s own life and wellbeing.” Government was to protect man’s freedom to do this by establishing a fair framework for production and ex­change, enforcing contracts, and protecting property rights — not by economic interference or the pursuit of specific economic outcomes. This allowed America to develop from a group of agricultural colonies into the world’s leading industrial nation. It also allowed for unprecedented class mobility.

If protecting natural rights was the Founders’ end, the rule of law and constitutionalism were their means. In his discussion of the debates that produced the Constitution, Spalding notes that the trick, as Madison argued, was to “first enable the government to control the governed; and in the next place oblige it to control itself.” To do this, America was to be “a government of laws, not of men.” These laws would be clearly promulgated, based on justice and the common good, and enforced for rulers and ruled alike. And what allowed the system to work was virtue. Spalding notes that while America “does not require a common theology,” it “does depend on a common morality shared by all people that is rooted in both faith and reason.” For John Adams, “our Constitution was made only for a moral and religious people. It is wholly inadequate to the government of any other.” After all, only if we master ourselves as individuals can we govern ourselves as a polity. But how can we do this? Better than the government, the local institutions of civil society can shape our character and care for our downtrodden. Only in this way could the state remain within its proper sphere of protecting natural rights.

Natural rights, limited government, public morality and religion, space for the institutions of civil society to care for the poor — if this is what the Founders sought to establish, Spalding argues, it’s also what the Progressives sought to undo. The latter denied eternal truths, including perma­nent principles of justice. Everything is ultimately relative to history, and thus, as Woodrow Wilson put it, politics “is accountable to Darwin, not to Newton.” Human nature itself is in flux, a mere social construct that can be refashioned by the experts controlling the state. In their en­lightened quest for “Progress,” they tasked the national government with providing material blessings. For this, they needed to reinterpret the Constitution: Witness FDR’s court-packing scheme and “living Constitution” theories. A new class of bureaucrats was to rise above partisan interests to govern us according to the new science of progressive ideals. What was left of rights, therefore, wasn’t a system of checks and limits on the state, but a series of entitlements one came to expect from the state. The welfare state of the New Deal and Great Society was born.

And here we are today. Perhaps becoming familiar with our founding principles can help reverse the tide against limited government. For that, Matthew Spalding’s book will be invaluable. Still, it has some limitations, ones that reflect poorly not on Spalding but on the American public. For he has written the book that Americans need now — a basic work on what used to be common knowledge. Nowhere does Spalding wrestle with the competing (legit­i­mate) interpretations of what the Founders did or what inspired them. De­bates rage among scholars over the relative contributions of ancients and moderns, Biblical religion and atheistic philosophy, on the Founders’ thought: Is America essentially Aristotelian, Christian, or Lockean? Spalding can’t wade into these waters because his audience hasn’t even gotten its feet wet.

Once one is acclimated to the water, though, there is room for doubts about the adequacy of Founding-era philosophy. If one agrees with Michael Zuckert that the Founding was essentially Lockean in spirit and if, as Spalding argues, it was preoccupied with protecting natural rights, then it faces well-known difficulties. Lockean thought is too limited to help us think through many of the dilemmas of our day. Taking rights as its starting point, it lacks a robust understanding of human nature, giving short shrift to the goods that perfect that nature and the principles that should guide our individual and collective pursuit of those goods. Even in Spalding’s account (which would interpret Locke “in light of classical political reason and Biblical revelation”), there is too much talk of liberty and independence and not enough recognition of the myriad ways in which man is, as Alasdair MacIntyre argues, a dependent rational animal. One wouldn’t be at fault for doubting whether all that government legitimately does can be expressed and analyzed in terms of “rights” (natural or otherwise). The protection of rights is an important part of the political common good, but not the whole of it.

Book Review from The National Review, by Ryan T. Anderson