The 10 Big Lies About America: Combating Destructive Distortment About Our Nation 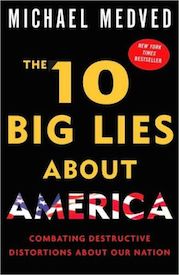 Have you ever wondered why so many people in this country are liberal Democrats? One main reason is that their heads have been filled with garbage — half-truths and outright lies about America that are passed off in our public schools today as gospel truth. But now there’s a remedy: in “The 10 Big Lies About America: Combating Destructive Distortment About Our Nation,” the acclaimed author and popular talk-radio host Michael Medved zeroes in on the most outrageously false and damaging fallacies that millions upon millions of Americans today believe about our country — in spite of incontrovertible evidence to the contrary.

Medved brilliantly and humorously demolishes the most pernicious pieces of America-bashing disinformation that inevitably creep into and distort current debates about the economy, race, religion in politics, the war in Iraq, and numerous other hotly contested issues. Medved shows that each of these lies — despite the fact that it is widely believed by the liberal elites and taught as absolute truth in our universities and public schools — is in reality a grotesque and propagandistic distortion of the historical record. Yet they’ve spread so far and wide that even Americans who deeply love their country can often have a complex and even tortured relationship with its past. That’s why Medved here takes on and explodes big lies and historical myths including the claim that the United States is uniquely guilty for the crime of slavery and that its immense wealth is based on stolen African labor; that the Founding Fathers intended a secular, not Christian, nation; and that Americans committed genocide against Native Americans.

Medved also turns his sharp wit and indefatigable commitment to accuracy on modern-day myths, such as the widespread assumptions that America is an imperialist nation and a constant threat to world peace; that compassionate government programs provide the best escape from poverty; and that America is in the midst of an irreversible moral decline. Myth-busting with Michael Medved:

A nation without pride in its past won’t feel confidence in its future — but “The 10 Big Lies About America” gives you the ammunition you need to fire back with dead-on accuracy the next time somebody tries to pawn off these baseless and cancerous falsehoods. Here at last is a refreshing reminder that as Americans we have every right to feel blessed, not burdened, by our heritage.