The Dadly Virtues: Adventures from the Worst Job You’ll Ever Love 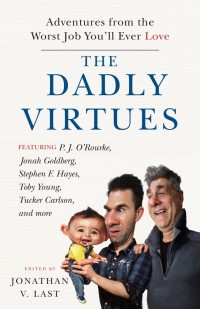 In The Dadly Virtues: Adventures from the Worst Job You’ll Ever Love, readers discover that fatherhood presents many diverse and new things for men to fulminate about. From dirty diapers and colicky babies to sibling rivalry, sex, dating, marriage and Hillary Clinton, paternity is the inspiration behind this hilarious look at fatherhood.

P.J. O’Rourke, the master of the ironic anecdote, sets the tone with his lead essay, “What Do Men Get from Fatherhood?” O’Rourke segues from Herodotus and public education to FDR and the New Deal with customary agility. Other kernels of wisdom come from WSJ hell-raiser Joe Queenan, as well as Tucker Carlson, Jonah Goldberg, Andrew Ferguson and more.

Edited by Jonathan V. Last, senior writer at The Weekly Standard, the book is a follow-up to The Seven Deadly Virtues, also edited by Last featuring many of the same comedic contributors. In his introduction, Last promises a fun, rollicking, good-time of a book, which he delivers in part with his own observations on failure and manliness in America. “All of which is to say that if we are failing as a nation, it may well be because we’re failing at manliness. And if we are failing at manliness, it’s probably because we’re failing at fatherhood.”

For me a few of the book’s memorable moments include Tucker Carlson shooting Barbie dolls from a homemade potato cannon, along with his own childhood memories of “car surfing” with his brother on their roof his family’s 1976 wood-paneled station wagon. Stephen F. Hayes’s madcap tribute to sibling horseplay is equally audacious. “Injuries were common and sometimes serious,” Hayes writes. “One time I caught Andy with a knee directly to the nose as I went airborne. It was bad.” But those things happen when brothers and sisters get together for pickup games of “basement football.”

The book’s irreverence is offset by tender recollections in James Lileks’s “Television and Kids: The Beauty and Pain of TV.” Lileks remembers watching Teletubbies and Baby Mozart with his infant daughter, a very special time before “the TV turned into something else, a horrible portal, a window you wanted to paint black” to escape the footage of the burning Twin Towers. Lilek also recalls the day when he suddenly became a teenager who was too cool to watch TV with his mother or father anymore, a bond lost on the way to adulthood.
“TV was a private thing now. It wasn’t something we shared anymore. Who in high school watches TV with their parents?”

One of my favorite essays is the last one by Joseph Epstein, “Thanks, Grandpa,” an ode to the helicopter parent, a tongue-in-cheek look at the passage of time and the unique cultural demands placed on each generation of fathers. “The culture of his day condoned my father in his certainty that his business came before all else, allowing him to become an honorable if inattentive parent,” Epstein writes. “Today if a father doesn’t attend the games of his children he is delinquent.”

For all its hijinks and impudence, lurking just beneath the surface of the book is an awareness of the importance of a father’s role, particularly today when the world is such a frightening place for kids and adults. With such oppressive obligations and nonstop worries, dads are left to wonder: is it all worth it?

It all depends on how you look at it, according to Toby Young in his essay, “The Dark Side.” “Fathers of the world unite. It doesn’t matter how crap you are, your kids will probably turn out okay. You might as well settle into a comfy chair, open another beer, and switch on the TV.”