Interview with Editor of “The Dadly Virtues” (Jonathan Last) 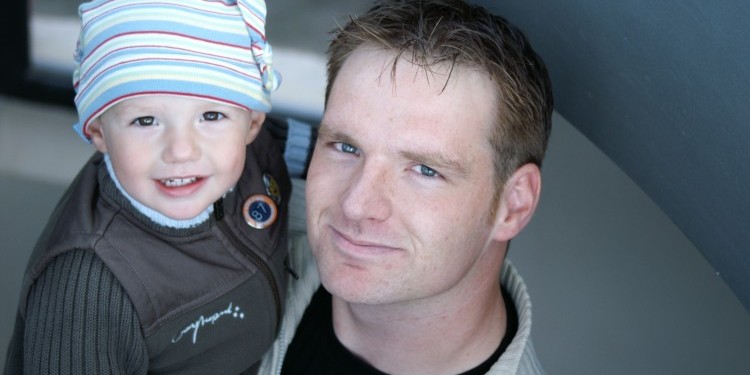 Congratulations Mr. Last on your new book, The Dadly Virtues: Adventures from the Worst Job You’ll Ever Love!  Can you give us an overview of your book, and what was your inspiration for writing a book about fatherhood?

Like most things in life, this book is really the product of serendipity.

I’ve wanted to write something about fatherhood for a long time. Since my first kid was born. You wouldn’t know this from the rest of my writing. I’ve taken an almost perverse pleasure in never mentioning my kids, anywhere. Just as a for instance: I wrote an essay about the old Mister Rodgers show, but I gave no explanation as to why I’d just spent several months watching every episode of Mister Rogers ever filmed.

Anyway, there were two problems with me writing a book about fatherhood. (1) No one was interested in having me write such a thing. And (2) Because I’m still new to the game—my oldest kid is only 7—I can’t see very far over the fatherhood horizon. Honestly, I’m in no position to tell anyone about anything about kids past the point of Little League. 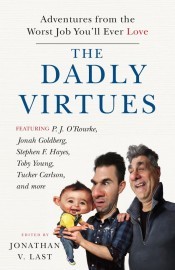 Then two things happened. Last year I edited a collection of essays for the Templeton Press about virtue (The Seven Deadly Virtues; get your copy today!) and it did well enough that they asked me to write a sequel. I didn’t want to do something obvious and on the nose—something like The Seven Awesome Sins might as well be Transformers 2. But suddenly I looked at my roster of writers from that first book and realized that most of them were fathers and their kids ranged in age from toddlers to grown-ups.

And then it hit me: The way for me to do the fatherhood book I’d always wanted to write was to bring together those guys and have us all write it together, since between us, we’ve seen just about everything fatherhood has to offer.

I decided to arrange the book chronologically, so that it starts with Matt Continetti going to birth classes and being terrorized by his newborn, moves on to Jonah Goldberg explaining why it’s important to get them a dog, Joe Queenan getting the kids through school, Christopher Caldwell on getting them through college, and so on. And it ends with the great Joseph Epstein talking about grandfatherhood.

The result is a book that’s half instruction manual, half war journal, and half philosophical meditation. The publisher was happy because they got a (sort of) sequel and I was overjoyed because I got not only the book I’d always wanted to write, but the book I wished I’d had when my kids were born.

And also, to be honest, the book I want to give my son when his turn comes to step up to the plate.

How did you bring together fellow co-authors, including Stephen Hayes, Tucker Carlson, P.J. O’Rourke, Matthew Continetti, and Jonah Goldberg, to participate in writing chapters for the book?  That’s quite a roster!

I knew most everyone in the book since before I’d had kids—in most cases, I’ve known them since before they’d had kids, or since their kids were really little. Over the years, I’ve gone to them for advice about all of this stuff—from dating and marriage to parenting.

So for me, this wasn’t really a case of bringing together an all-star list of conservative writers. It was just going to my friends, with whom I’ve talked about this stuff for years, and bringing them onboard a single project all together.

(And yes, I realize how incredibly lucky this makes me. I realize it and give thanks for it every day. Seriously.)

Hard to limit it to just three, but I’ll give it a stab:

(1) Fatherhood isn’t all unicorns and rainbows. I hate—really, really hate—saccharine, Hallmark-style treatments of fatherhood. It isn’t soft-focus, it isn’t all fun, and it requires you to pretty much sacrifice your former life to what is a new calling. It’s not quite as radical a lifestyle change as joining the priesthood, but it’s in that ballpark.

And we really don’t soft-peddle any of that in the book. It is, as the kids say, #realtalk.

But at the same time, it’s worth doing for very deep, serious, philosophical reasons. As I argue in the introduction, fatherhood is the wellspring of manliness (or at least the good side of manliness) in the world—even if it doesn’t seem especially manly to spend your days changing diapers and driving a minivan to travel soccer.

(2) Ninety percent of fatherhood is just showing up. It seems creepy to be paraphrasing Woody Allen on the subject of being a father, but it’s true nonetheless. As Steve Hayes says in the book, it’s almost unfair that we have to show up to the most important job most of us will ever have with—by definition—no experience. I’m a pedestrian father, at best. If fatherhood was baseball, then I’m sitting right on the Mendoza line. But I’m trying to get better at it and I’m hoping that, eventually, I’ll be able to hit the big-league curve. And the reason I’m hopeful is that I show up, every day.

If you show up, ready to play, even when it stinks, even when it’s no fun, then I think you’re basically doing fatherhood right.

(3) Matt Labash writes the chapter in the book on giving kids the talk about the birds and the bees. It’s fantastic. Funny and profound. You’ll love it. But it’s for entertainment purposes only. WARNING: The surgeon general has determined that taking sex-talk advice from Matt Labash can be hazardous to your marriage.

Much has been said about the evolving family in America.  Why is having a father still important for a family?

Joseph Epstein raised his kids as a single father and here’s what he has to say about the matter in his chapter: “I do not have any axiomatic truths about raising children except this one: A single parent, man or woman, no matter how extraordinary, will always be insufficient.”

For me, that’s the end of the argument right there. And mystified as to how anyone who has ever been a parent could believe otherwise. It’s simply too big a job for a one person. Full stop.

You could go further than that, I suppose, and talk about the elemental differences between mothers and fathers. These are real, too, and denying them requires a kind of willful blindness. Look, my wife and I have such an egalitarian setup with the kids that we might as well be Scandinavian. However conservative we are politically, in the home we might as well be socialists when it comes to parenting. And even in this super-progressive dynamic it’s plain that the kids react to us differently, because one of us is the mother and one of us is the father. This is a real thing. And important, too.

Too many to list here, but a very big influence for The Dadly Virtues is Harvey Mansfield’s Manliness. Professor Mansfield is one of the giants of our time and I’ve only met him once, but that occasion left a very deep mark on me.

George Will’s clarity, range, and mastery first described to me what political writing could be like, when done well. Andrew Ferguson’s artistry—especially in his book Crazy U—taught me that if you couldn’t be engaging, then you might as well not write at all. My sincerest hope for The Dadly Virtues is that it’s the kind of book that, once you start it, you look forward to sitting down with it again. And that once you finish it, you’ll be eager to give it someone else.

And this isn’t a especially on point, but my boss at The Weekly Standard, Bill Kristol, has influenced my thinking about everything—politics, writing, life—more than just about anyone. I can’t actually tell you what a great man he is. Because you wouldn’t believe me.