The Last Fighter Pilot: The True Story of the Final Combat Mission of World War II 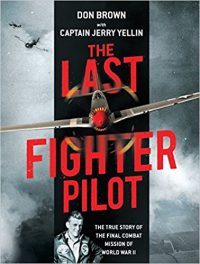 Few men can say they were the first to do something, and few can say they were the last. Capt. Jerry Yellin, for example, was the last man to fly a combat mission in World War II. On August 15, 1945, almost simultaneously with the Japanese surrender, Captain Yellin flew out of Iwo Jima to bomb Tokyo, and when he returned to Iwo Jima, he discovered that the war he had fought so bravely in was finally over. He was The Last Fighter Pilot.

With a keen eye for detail and descriptions, former JAG officer and military writer Don Brown captures the excitement, the fear, and the momentum of that last combat mission.  Brown does due diligence to Yellin’s life story, capturing his early years as a young, Jewish man from New Jersey who experienced anti-Semitism first-hand in his childhood and was determined to fight back against it.

The other man that Brown covers in this story is First Lieutenant Philip Schlamberg, the last man to die in combat in World War II. On the same mission that made Yellin famous, Schlamberg lost his life and was never seen again.  Brown weaves their stories together intricately to put the reader into the folds of their friendship and their brotherhood, honoring Yellin and remembering Schlamberg.

The reader jumps rights into the heart of the Pacific theater during the final days of the war — into the foxholes that Yellin had to dig and the islands that America had to conquer. This focus allows Brown to show us the better kind of detail, eschewing the rest of the war to give us a glimpse of this last air mission.

Brown’s descriptions of what Yellin witnessed, both on the ground and in the air, draw you into the moment, riveting readers to the page. There are also, of course, more mundane moments — like when Yellin was grounded during another mission because he was recovering from having his wisdom teeth removed.

Intermingled with these harrowing accounts of war are explanations of military protocol, flight patterns, the food the men were eating, and more. Don Brown spares no expense as he recreates the world of Yellin and Schlamberg and the men around them, including their commanding general, Major General Curtis LeMay and flight surgeon Dr George Hart.

Brown shows the heartbreak and suffering that the men experienced as their friends were killed or, even worse, taken hostage by the Japanese. The Last Fighter Pilot is an illuminating look at one of history’s little stories, showing that heroism never ends, even if the war does.