The Religions Next Door 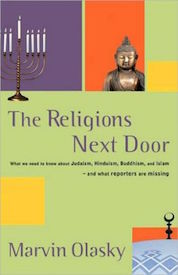 Aren’t all religions fundamentally the same? Don’t they teach the same basic ethical principles, and worship the same God? To the media, the answer is an obvious “yes” — but the real answer is an emphatic “no.” Now, in “The Religions Next Door: What We Need to Know about Judaism, Hinduism, Buddhism, and Islam — and What Reporters Are Missing,” Marvin Olasky tells the truth about about non-Christian religions — and the danger of believing that all religions hold different variations of the same tenets.

Olasky, a journalism professor at the University of Texas, and editor-in-chief of World magazine, also challenges the way religion is reported in the media, revealing that not only do the media invest little in religion reporting generally, but the reporters they do hire tend to reflect the secular, anti-Christian ideologies of the newsrooms which they serve.

But the heart of Olasky’s book is his straightforward treatment of the four major non-Christian religions — for each of which he provides a concise yet thorough account of its history, beliefs, rituals, and key figures, plus a glossary of terms. “It is neither wise nor compassionate to remain uninformed . . . when one culture may be threatening another, to settle for the most superficial coverage of that culture’s belief, or to assume that both cultures have essentially the same understanding of who God is,” Olasky warns.