Conservative Book Club » Bestsellers » A Time for Truth: Reigniting the Miracle of America

A Time for Truth: Reigniting the Miracle of America 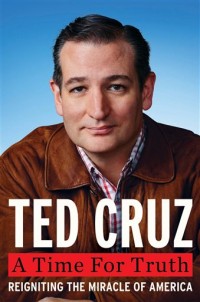 Ted Cruz came to the Senate in 2012 and found his niche by refusing to abandon conservatism. The speed of Cruz’s rise was fueled by strong rhetoric, dazzling oratory and a refusal to sacrifice ideas for gentility.

In his new book, A Time for Truth: Reigniting the Promise of America, Cruz wants an end to political parlor tricks and mendacity; he wants a grassroots commitment by politicians to level with constituents. “In the Senate, I’ve tried to do two things: tell the truth, and do what I said I would do. We should expect that from every single elected official,” Cruz writes.

Cruz’s story is so singular at times that it reads like fiction.

Long before he was an obscure longshot to fill retiring Republican Kay Bailey Hutchison’s U.S. Senate seat, Cruz was a geeky Houston teenager with a penchant for pranks, testing the bounds of authority with cans of shaving cream and toilet paper rolls. Going to parties, looking for girls and drinking beer was fun but Cruz was struggling to find his place in the world.

Throughout the book, Cruz identifies key points in his life where mundane occurrences became opportunities for personal and spiritual growth. Getting elected class president twice during high school marked an early turning point for Cruz. “It taught me a vital lesson: that popularity wasn’t all that consequential. Happiness doesn’t come from popularity, but rather from doing something that matters, making a difference, and fulfilling God’s plan for your life,” Cruz writes.

Possibly the biggest academic influence on Cruz’s life in high school came from his involvement in an after-school program run by Rolland Storey, a retired business executive and motivational speaker who founded the Free Enterprise Institute, a Houston-based think tank. Cruz discovered the Constitution, the Federalist Papers and the Anti-Federalist responses. He travelled the state speaking at Rotary Clubs and Kiwanis Clubs with other students. Each of them would write from memory the entire Constitution in a shortened mnemonic form before delivering a thirty-minute presentation on it. That experience informed Cruz’s outlook today.

“The more I studied free-market economics and the Constitution, the more obvious it became to me that there is a systemic imbalance in our political discourse,” Cruz writes. “On the left, for the advocates of government power and statism, the best and the brightest are consistently attracted to the organs for the transmission of ideas, namely politics, journalism, entertainment, or academia. In that respect, Barack Obama is the epitome of the perfect leftist.”

On the right, according to Cruz, the believers in free market and individual liberty too often enter the business world rather than fight it out in the political arena. “Much of where we are today can be traced to that imbalance,” Cruz writes.

The son of driven parents–an Irish mother, and a Cuban immigrant father who fled Batista’s Cuba for Texas–Cruz’s competitive streak and pugnacity should surprise no one. Far from being your average teenager, Cruz followed an elite path to the Ivy League to coveted clerkships.

After visiting several elite colleges during his junior year, Cruz fell in love with Princeton, arriving in the fall of 1988 with a Texas drawl and cowboy hat. He gravitated to Princeton’s debate team where he honed his command of the Constitution, and later wrote a senior thesis about the Ninth and Tenth Amendments.

In Houston, Cruz had imagined himself becoming a businessman, but he was inspired to pursue law partly by reading The Brethren, a 1979 book by Bob Woodward and Scott Armstrong which included interviews with former law clerks. At Harvard Law School, Cruz studied with Alan Dershowitz, among other legal luminaries. Cruz’s time at Harvard led to coveted Supreme Court clerkships. In the chapter entitled, “May It Please the Court,” Cruz shares various insights and anecdotes about each of the judges, including the time he watched explicit pornography with Justice Sandra Day O’Connor.

At times Cruz’s narrative gets bogged down in legal proceedings, or the role he played in this or that case while serving as Texas solicitor general. Nonetheless, it’s remarkable how Cruz landed that job at the age of 32, and in just over six years argued nine cases before the U.S. Supreme Court. He won five of those cases partly by choosing the terrain on which those battles were fought, something he learned from his careful application of Sun Tzu’s teachings. “Litigation is no different. Nothing is more important than how you frame the narrative, which is the intellectual terrain on which the legal battle will be fought,” Cruz writes.

Cruz writes about his role in the 2000 presidential election on behalf of candidate George W. Bush, who tapped Cruz to assemble a legal team to deal with the Florida recount debacle. Ultimately Cruz was dismayed that his efforts didn’t land him a meaty job in the Bush administration, a “crushing blow” but a teachable moment. Apparently Cruz had forgotten some of his own life lessons, had become “far too cocky for my own good,” and “burned a fair number of bridges on the Bush campaign.”

“Going through that experience altered my personality and forced me to view the world differently, to treat others with greater respect and humility…I needed to get my teeth kicked in. And if it hadn’t happened, there’s no way I would be in the U.S. Senate today.”

In A Time for Truth, Cruz calls out anybody who’s ever crossed him or settled for less than absolute conservatism, a list top-heavy with GOP members. Cruz is not afraid to toot his own horn or use his legal expertise as a bludgeon. Readers will have to decide whether his rhetoric has been counterproductive politically or personally. Either way, Cruz’s book offers insight into the intellectual growth of an enigmatic politician, and his extraordinary route to prominence.