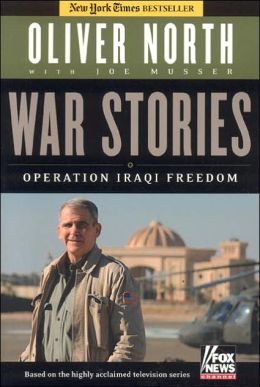 The Courics, Koppels, and Sulzbergers of the world are trying to take away our victory in Iraq, but Oliver North knows better. He was there. In “War Stories: Operation Iraqi Freedom” he sweeps aside the empty, second-hand chatter of liberal pundits to give you a riveting, eyewitness account of the heroism, courage, and unflagging patriotism of the American military forces that ended Saddam Hussein’s bloody tyranny.

Embedded with Marine and Army units for Fox News during Operation Iraqi Freedom, Colonel North (himself a decorated combat veteran) here vividly tells the whole story that his news camera gave glimpses of during the campaign to liberate Iraq. From the opening seconds of the war — when North witnessed the conflict’s first American casualty — all the way to the takeover of Saddam’s hometown of Tikrit, War Stories is an exhilarating day-by-day diary that offers you an opportunity to see the war in Iraq not as the liberal media would like you to see it, but as it unfolded before the eyes of those who fought it.

North’s accounts of his adventures are riveting — from his ride in a helicopter through an Iraqi sandstorm and his perilous trip in another that is shot up by Iraqi antiaircraft guns to his dramatic walks down Iraqi highways alongside intrepid American Marines. At every step of the way he gives you insights into Operation Iraqi Freedom that only a fellow warrior could provide. And unlike most reporters these days, he is unabashed in his admiration for the hardships they endured, and the courage, compassion, and skill they brought to their perilous mission. This isn’t a book about generals and admirals; North introduces you to the young warriors who put their lives on the line — the victors who now hope that their stunning triumph won’t be stolen from them by naysayers, critics, and the antiwar crowd.

With the authority of an eyewitness and a combat veteran, North succinctly skewers the conventional view of the Iraq war, asking simply: “What quagmire?” He unblinkingly refutes accusations of Pentagon planning blunders, shortages of food, fuel, and ammunition, rejection by the Iraqi people, and the expectations of huge American casualties. He also provides a wealth of briskly told historical background that places the present conflict in an illuminating context that you won’t get from the New York Times or 60 Minutes.

Now that the media establishment’s embedded correspondents have returned home, those who dip their quills in poison ink have the forum. But Oliver North isn’t about to let them rewrite history. He offers here a trustworthy chronicle of the remarkable military force that in Iraq did nothing less than surpass all others in history: no military advance has ever gone so far, so fast, and with so few casualties.

Filled with North’s trademark honest, in-depth, and inspiring reporting, this is a gripping and insightful look at the latest crop of American (and world) heroes: those who fought and won Operation Iraqi Freedom. A few highlights from Oliver North’s up-close look at America’s newest heroes: