What’s So Great About Christianity 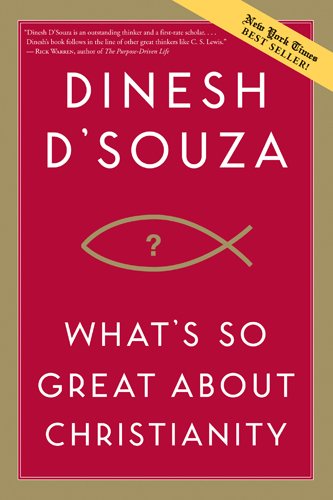 Christians are called upon to be “contenders” for their faith. Today, that means confronting the challenge of modern atheists, who — in such anti-religious bestsellers as “The God Delusion,” “The End of Faith,” and “God Is Not Great” — have declared open warfare on the Christian faith. Now, in “What’s So Great About Christianity,” bestselling author Dinesh D’Souza gives Christians a kind of toolkit to meet this challenge head on — or risk being silenced altogether.

“The atheists no longer want to be tolerated,” D’Souza warns. “They want to monopolize the public square and to expel Christians from it. They want political questions like abortion to be divorced from religious and moral claims. They want to control school curricula so they can promote a secular ideology and undermine Christianity. They want to discredit the factual claims of religion, and they want to convince the rest of society that Christianity is not only mistaken but also evil. They blame religion for the crimes of history and for the ongoing conflicts in the world today. In short, they want to make religion— and especially the Christian religion— disappear from the face of the earth.”

Many Christians, unfortunately, simply want to “duck and run,” leaving atheists’ challenges unanswered — which only emboldens them further. D’Souza, in contrast, dares to meet atheists like Christopher Hitchens, Sam Harris, and Richard Dawkins on their own secular turf. Using evidence from science, history and philosophy, he counters atheists’ arguments that Christianity is opposed to science and reason; reveals the Christian roots of Western civilization; explains how the crimes of atheist regimes far exceed those of Christian societies; and explains why secularism and atheism are actually on the decline.

D’Souza also exposes the atheists’ cheap debating tricks — such as arguing with the straw man of a caricatured “fundamentalist” Christianity. “The Christianity defended here is not ‘fundamentalism’ but rather traditional Christianity, what C. S. Lewis called “mere Christianity,” the common ground of beliefs between Protestants and Catholics. This Christianity is the real target of the secular assault.”

“Those who believe in God are at present being subjected to a barrage of atheist propaganda, directed particularly at Christianity. What’s So Great About Christianity is a much-needed response to this offensive. It is wide-ranging, specific, well-researched, and dependably accurate. It will be of immense value to all those who wish to defend and uphold the Christian case.” —Paul Johnson, author of Modern Times

“With scholarship and eloquence that reminds me of C. S. Lewis, Dinesh D’Souza addresses the urgent questions of our time, such as ?Is Christianity believable in the face of the discoveries of modern science and modern scholarship?’ His answer is a resounding ?yes.’ More than a decisive refutation of atheist attacks, this is a powerful, affirming, genuinely exciting argument for Christianity. You may want to carry this one around with you.” —Reverend Robert H. Schuller

“Responding to the current epidemic of atheist manifestos, Dinesh D’Souza applies just the right balm for the troubled soul. Assembling arguments from history, philosophy, theology, and science–yes, science!–he builds a modern and compelling case for faith in a loving God. If you’re seeking the truth about God, the universe, and the meaning of life, this is a great place to look.” —Francis Collins, director of the Human Genome Institute

“The great merit of this book is that it concedes nothing. Rather than engaging in the usual defensive ploys, D’Souza meets every anti-God argument head on and defeats it on its own terms. He subjects atheism and scientific materialism to sustained rigorous interrogation and shows that their claims are empty and incoherent. Infinitely more sophisticated than the rants produced by Richard Dawkins, Sam Harris, and Christopher Hitchens, What’s So Great About Christianity leaves those atheist books in the dust.” —Stanley Fish, author of How Milton Works

“If there is a purpose for the recent attacks on God and Christianity, it is that these angry assaults have inspired a sober and informative answer of the kind this book provides. This is a timely, important, and illuminating work, scholarly in tone, though accessible to a general audience. Agnostics and atheists will not be able to ignore this challenge.” —Daniel Robinson, Oxford University

“As an unbeliever I passionately disagree with Dinesh D’Souza on some of his positions. But he is a first-rate scholar whom I feel absolutely compelled to read. His thorough research and elegant prose have elevated him into the top ranks of those who champion liberty and individual responsibility. Now he adds Christianity to his formula for the good society, and although non-Christians and non-theists may disagree with some of his arguments, we ignore him at our peril. D’Souza’s book takes the debate to a new level. Read it.” —Michael Shermer, publisher of Skeptic magazine

“Pastors, teachers, believers, and the sincerely perplexed will find this book indispensable. It sets an example of how to engage vitally important questions without mudslinging and prejudice. D’Souza uses facts and careful reasoning and exposes the atheist attack as intellectually baseless. Rarely have I seen such forceful clarity brought to an issue of such timeliness and importance.” —Dallas Willard, author of The Divine Conspiracy