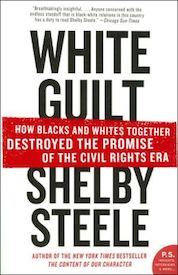 Shelby Steele casts White Guilt as an internal monologue on a solitary car trip, undertaken as the Monica Lewinsky scandal was erupting. It occurs to Steele that if Dwight D. Eisenhower had been discovered to have engaged in such sexual escapades, he would have been out of a job in short order. On the other hand, it is rumored that Eisenhower used the N-word occasionally in private conversations—and Steele points out that if Clinton had been heard doing the same, he’d have been on the street in a second. In the late 1960s, he writes, “race replaced sex as the primary focus of America’s moral seriousness.”

His extended reflection revisits the penetrating insights of his previous books, The Content of Our Character and A Dream Deferred, both of which were—to recruit and redirect what Woodrow Wilson said after viewing The Birth of a Nation—“history written with lightning, and my only regret is that it is all so terribly true.” Steele recounts growing up in the segregated America of the 1950s, joining the herd to become a black militant in the late 1960s, only to realize twenty years on that there was a lack of fit between these “Right on!” politics and his actual life—and his sense of logic. Steele has a crucial authority in that his lifespan and experience allow him to testify from three black lives: working in lousy jobs under Jim Crow, storming a college president’s office as a Black Power protester, and finally standing firm as a renegade “black conservative.”

The countercultural revolution conclusively divested white Americans of the moral authority they had always enjoyed. From then on, the culture has allowed whites moral legitimacy only with the requirement that they dissociate from racism. The problem is that showing that one is not racist is not the same as actually helping black people, or even treating them as full human beings.

Whites’ new interest in not looking racist played tragically into a rip that the post- civil-rights era left in the black psychological fabric.

The official script is that the urban riots and angry politics were simply a response to oppression. This is a mistake: If it were not, then slavery would have been impossible to maintain. Black America’s problem now was not oppression but, ironically, freedom.

Steele notes that for all groups recently freed from oppression, “freedom shows them their underdevelopment and their inability to compete as equals.” Once racism had become the new pedophilia in terms of social incorrectness, blacks were presented with a tempting strategy for dealing with this insecurity: seeking validation in the theatrics of “black rage.” “Anger is acted out by the oppressed only when real weakness is perceived in the oppressor”—and blacks were now assured that whites would play their part in what Steele has elsewhere described as a dance, dutifully concurring that racism is the source of all black problems.

Since then, many blacks have—perplexingly—seen strength in their insistence on weakness: “Black militancy became, in fact, a militant belief in white power and a correspondingly militant denial of black power.” Steele gets at the heart of this. With whites now founding their sense of morality on their openness to black grievance, “Black Power” became a psychological crutch for blacks. Its failure to produce tangible benefits for blacks was beside the point; its attraction was psychological. Steele fell for it himself for a while: “This identity was suddenly the source of a wonderful new self-esteem . . . ‘being black’ aligned me with one of the world’s great stories of long-suffering innocence.”

Bizarrely, black fans of racial preferences now casually champion what used to be called tokenism, since being a noble black victim has come to trump personal excellence.

Meanwhile, because few could fail to notice an incongruity between the apocalyptic tone of Black Power rhetoric and an America in the process of passing landmark civil-rights laws and offering blacks ever- widening job opportunities, there began what Steele calls

a Marxist reinterpretation of racism: the idea that the problem is “systemic” racism and “white privilege,” abstract but inescapable, and thus always available as a motivation for more aggrievement rhetoric. This idea has indeed become a badge of the moral legitimacy Steele pegs whites as seeking: When I am on a panel with a liberal black speaker, I can always expect white audiences of a certain demographic to give a brief, dutiful ripple of applause as soon as that person utters the term “systemic racism.”

As always, Steele’s writing is a marvel of lapidary elegance. His vignette in which a white self-professed “architect” of the Great Society attacks Steele at a party for dismissing the achievements of his cohort is exquisite. The man admits that the programs mostly failed, but supposes that we should still try the same kinds of things again. Steele asks him how he would do things differently now, only to have the man sputter ever more angrily about how grateful poor blacks had been when the programs began. That is, the man was interested not in the people’s welfare, but in their affirmation of himself as not a racist.

Steele is also to be commended for outing Maureen Dowd as having had the same motivations. In a 2003 column on Clarence Thomas’s dissent in the Supreme Court’s decision on affirmative action, she assailed Thomas for his “ingratitude” concerning such policies. Steele calls the column “vile,” which, I think, is too kind; it was the most repulsive 700 words I have ever read. Steele cuts right to the heart of the doubletalk: “We’ll throw you a bone like affirmative action if you’ll just let us reduce you to your race so we can take moral authority for ‘helping’ you.” Steele caps it with: “When they called you a nigger back in the days of segregation, at least they didn’t ask you to be grateful.”

I do wish, however, that Steele had gone to a certain amount of effort to engage typical objections to arguments like his. There are reasonable readers whom Steele’s points could reach if only he were to do some brush-clearing. For example, at one point he says: “It must be acknowledged that blacks are no longer oppressed in America.” But many black readers will object that black people even today experience what is often described as a “daily litany” of racist slights, that black people get worse mortgage and car-insurance deals than whites, and so on. There are effective answers to things like this, but in their absence, Steele’s work largely reaches a certain segment of white America, while being decried—mistakenly—as “oversimplified” by too many sensible black people. This is unfortunate, for the simple reason that there is no writer who deserves black America’s allegiance more than Shelby Steele.

Book Review from The National Review, by John McWhorter