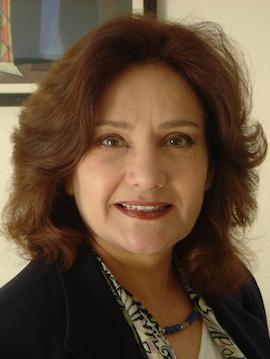 Nonie Darwish is an author and activist.  She holds a Bachelors degree in Sociology and Anthropology, and was a journalist at the Middle East News Agency. She founded Arabs for Israel in 1994 to promote understanding, peace and a new paradigm for Arabs to view Israel.

Nonie is a senior Fellow at the Center For Security Policy. In 2009, she co-founded Former Muslims United (FMU), which stands for freedom of religion and to protect the civil rights of people born in Islam who wish to leave the religion.

Nonie was born and raised as a Muslim in Cairo Egypt and Gaza, and lived in the heart of the Arab-Israeli conflict during the 1956, 1967 and 1973 wars. Her father headed the Egyptian military intelligence in Gaza in the 50’s and led the ‘Fedayeen’ operations against Israel under the leadership of President Nasser of Egypt. He was killed by Israel in Gaza in 1956.

Nonie is a Middle East expert and covers topics related to human rights and women’s rights under Islamic law, the Arab-Israeli conflict, terrorism, radical Islam and its agenda. She lectures extensively on college campuses and internationally. She was published in the Guardian and Wall Street Journal and appeared on CNN, Fox, MSNBC, C-SPAN, BBC and Al Arabiya. She spoke before the European Parliament, members of the British House of Lords and at Oxford University.