Conservative Book Club » National Security & Military » Now They Call Me Infidel: Why I Renounced Jihad for America, Israel, and the War on Terror

Now They Call Me Infidel: Why I Renounced Jihad for America, Israel, and the War on Terror 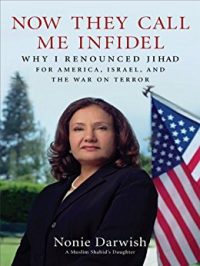 Why are so many Muslims embracing jihad and cheering for al-Qaeda and Hamas? Why are even the modern, secularized Arab states such as Egypt producing a generation of angry young extremists?

Nonie Darwish knows why. When she was eight, her father died while leading Fedayeen raids into Israel. Her family moved from Gaza back to Cairo, where they were honored as survivors of a “shahid”—a martyr for jihad. She grew up learning the same lessons as millions of Muslim children: to hate Jews, destroy Israel, oppose America, and submit to dictatorship.

But Darwish became increasingly appalled by the anger and hatred in her culture, and in 1978 she emigrated to America. Since 9/11 she has been lecturing and writing on behalf of moderate Arabs and Arab-Americans. Extremists have denounced her as an infidel and threatened her life.

In this fascinating book, she speaks out against the dark side of her native culture—women abused by Islamic traditions; the poor and uneducated mistreated by the elites; bribery and corruption as a way of life. Her former friends and neighbors blamed all the their troubles on Jews and Americans, but Darwish rejects their bigotry and calls for the Arab world to make peace with the West.

The only hope for the future, she writes, is for America to continue waging its War on Terror, seeding the Middle East with the values of democracy, respect for women, and tolerance for all religions.