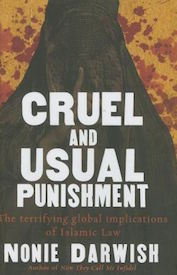 For the first thirty years of her life, Nonie Darwish lived as a slave to Islamic law, Sharia — which, as “Allah’s law,” no one dared question. But now she is free, and is revealing the secrets that Islamists in America and around the world don’t want you to know. In “Cruel and Usual Punishment: The Terrifying Global Implications of Sharia Law,” she exposes just how inhumane and destructive Sharia law really is — and how Islamic jihadists are making a concerted effort to bring these cruel laws to the Western world, and destroy our freedoms from within.

Darwish, who was raised as a strict Muslim in the Gaza Strip and is the daughter of an Islamic “martyr,” explains the roots of Sharia, and why Muslims cling so tenaciously to its many laws, which cover virtually every aspect of human behavior. She shows how women are the primary victims of Sharia law: reduced to chattel and consigned to a life of virtual slavery by the marriage contract. Drawing upon searing personal experiences, Darwish examines how Sharia suffuses every aspect of Egyptian society, and explains how — although Sharia heavily favors men over women — it actually gives men only the illusion of power. She explains how Islamic law encourages authoritarian governments, and allows men in numerous ways to do nothing less than get away with murder. And above all, she outlines how Muslims can reject and rise above the hatred and inclination to violence that Sharia inculcates.

“Western civilization,” says Darwish, “finds itself at a crossroads where the virtue of political tolerance must be wed to the political will necessary to defend its very way of life.” Adherents of Sharia law are attempting to infiltrate Western culture and destroy democracy — Darwish sketches out a nightmare world of what that might mean for American society.

“Cruel and Usual Punishment” is an essential look from the inside at the draconian seventh-century laws that Islamic jihadists are laboring to impose upon the world — and a warning that America and Europe must heed before it’s too late. “The West,” Darwish warns, “must act and act now. If it cannot, or will not, it will later pay a heavy price.”